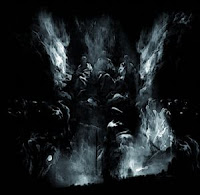 To be honest, my passion for heavily blasting, brutal black metal has begun to null through the years. It's not that I don't appreciate the sheer will and energy the form requires, but I feel it often throws a band up against a wall. It's all been done, by the Norse and the Swedish, the Polish, the French and the Finns, so it falls upon a band to write riffs so amazingly intuitive, destructive and memorable that they can overcome the monotony of the blasting, and said wall becomes nearly impossible to scale. I mention this with regards to the French band Nyseius because, as orthodox and average as their sound might seem, they've got just enough going for them in the rhythmic department that they climb up and over.

Pick no bones about it, Nyseius are a band heavily influenced by the grim Northern forefathers who married streams of melancholic or downright diabolic chords and single picked notes with thundering drums and resonant, harrowing vocals. You'll hear a trace of Anthems to the Welkin at Dusk here, or Des Mysteriis Dom Sathanas, as you would with almost any band sticking to the core expression, and you'll also hear a similarity to some of the earlier work of their countrymen Merrimack or Deathspell Omega (before their more experimental phases). For a debut album, Militiaie is incredibly well produced, with a superb level of atmosphere that endows each poison-dripping riff with additional sting, and an excellent performance from the drummer Morguth. The bass is great, and the guitars are like knives, constantly stabbing your eyes. Though it provides their backbone, Nyseius actually stray from the blasted path quite often, with a good amount of slower or mid-paced material that helps prevent a total headache from setting in.

The entire effort is about 35 minutes long, with four full-length black metal tracks, an intro and outro, and the brevity of the album is one of its strong points. Although most of the tracks are beyond 8 minutes in length, the commitment to varied tempos prevents them from feeling like the endless loop cycles of by-the-numbers black metal that so many other bands trap themselves with. "Lueur d'une Lune Morte" is both the longest and strongest of the tracks, for the desperate seething surge that recedes for a frozen shore of lost souls, a mid-paced miasma that provides a launching point for the more inward musings of the extended bridge after the 4:00 mark. "Endless March" also has some ghastly, hideous moments of misanthropy where the drums drop out and the guitars simply rage off across the nightscape, while a solemn French voice gently speaks. "Militiae" itself is not bad, and the dark ambient intro and outro sandwich the necrotic flesh of the metal tracks in a ghostlike, foreboding aegis.

Nyseius is effective enough, and very competent at managing dynamics and hostility, but the one area they feel a little weak on would be the riffing itself. The guitars all feel like safe, consecrated ground that we've revisited countless hundreds of times by now, and though I've listened through the effort a number of times, none really stand out long past the actual presence of being there. Sure enough, if you were to turn the volume up and blast this album while driving at night or having a particularly bad day in need of energetic release, this album would deliver. But if you're seeking the stuff of legends, I'm afraid Militiae is nothing more than a very well performed, almost intricate reiteration. If you're seeking the more metaphysical embellishment and experimentation of fellow French acts like Blut Aus Nord or latter day Deathspell Omega, this is probably not the sort of album that will appeal to you. But if you just want a bolt of black thunder to frighten the neighbors or the police when they inevitably pull you over, then I suppose this is as good as most.