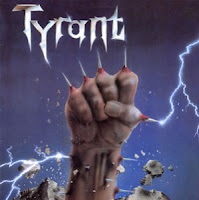 If only it were so easy for us, the pitiful and marginalized elder metal addicts, to sprout lightning attractor spines from our knuckles, and crush rock with our bare hands. But on second thought, none of that makes any sense, and the cover to Tyrant's second full-length Fight for Your Life seems a cheesy pastiche of stereotypes, nearly as absurd as the image gracing Thrust's Fist Held High, from a year prior to this. It is thus a foregone conclusion that these Germans must adhere to the traditions of the 80s, with various songs about fighting for one's freedom, kicking ass at the bar, attracting the finer sex from said bar, fighting for their freedom, exiting stage left in a Corvette, and banging heads all night long.

I expected very little from Tyrant when I first heard them, so I was rather surprised by the decent writing here. This is big German metal with hooks and distinct, dust sucking vocals courtesy of a man who calls himself 'Kerrmit', and not to be confused with the darker American band who performed heavy/doom metal. The riffs here sound quite similar to the first few Running Wild records (up to Under Jolly Roger), albeit a little less heavy. Or perhaps a more reckless and wild alternative to Accept. A little grace and melody are not beyond the domain of this Tyrant, and the result is an enjoyable 36+ minutes of pure power riffing and a front man who sounds like he's very deep in his cups and trying to stifle a vomit each time he completes a line. Some might consider this talentless anathema...I consider it a lost Holy Grail, and slam shut the steel portcullis on their toes!

You need listen no further than the first few tracks to become absorbed into Tyrant's rocking abandon. The album begins with what I'm assuming is a bass tapping solo with some synths added for atmosphere, immediately transfixing, before "Up the Hammer" strides out with some bold/power speed metal and we are given an introduction to Kerrmit's odd voice. This whole song rules, in particular the 2nd, shredding, classical lead over which the keyboards return at around 3:30, before Kerrmit returns to hurl bile all over the listener who was just getting into that. It's difficult not to laugh at this contrast, but ultimately I found it more endearing than offensive. Next comes the title track, a desperate metal anthem with a grooving chorus and some more of the great guitar leads, and then the mid paced rocking of "Metal Rules", a title which I probably would not accept so readily had this album not dropped 25 years ago.

"Streetfighter" opens with a slowly pumping, choppy melodic grace, and Kerrmit takes more of a central role, putting a little more LA hard rock spin to his voice. The song feels a little sloppy, but at the same time, I love the riffs and the chorus is so hilarious (in an innocent way) that I nearly laughed my prostate gland in twine. There is no shortage of energy to the rest of this fare, from the filthy, searing "Two Down One to Go" to the careless attitude of "Danger", or the excellent "Goddess". There are a few bonus tracks here of note. "Rock Your Bottom" is your typical Priest or Accept anthem, with a nice stretch to the chords while the bass pumps below and the clean guitars bristle you straight back into the most glorious of decades. I won't lie, this is molten rock best suited for the catwalk at a Bear Convention, but it has an undeniable charm. "She's a Killer" is faster, and I love the guitars, almost like an early Rage track, but more subdued. Both of these also appear on the following album Running Hot.

Speaking of subdued, one of the highlights of this record is the rather laid back production, with well balanced reverb and a nice, crunchy guitar tone that brings out an organic value to the stock riffs. The band may not compose at the level of genius, but certainly the little touches of classical guitar influence in the leads and the general quality of each riff go a long way to compensate for the vocals, which will sink or swim any new listener's attention span. If you enjoy the dirtier side of German, charismatic vocal like Rock'n'Rolf, Hansi Kursch, Krist Boltendahl, or the lower range of Peavey Wagner or Udo Dirkschneider, than you may be able to penetrate beyond Kerrmit to the juicy flesh below the Tyrant's skin. If not, I can't see how you'd come to be listening to this album in the first place. There is nothing outstanding to be had with Fight for Your Life, but it's one of this band's better efforts, alongside the debut Mean Machine, and nearly a godsend for those who would call Restless & Wild, Gates to Purgatory, Heavy Metal Breakdown their bread and butter.