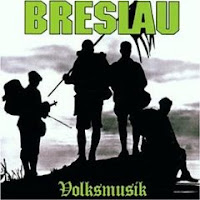 If I were to hazard a guess, I would assume that the majority of the (admittedly small) cache of metal fans out there actually exposed to the career of Jutta Weinhold would know her through her two Zed Yago albums. They were the most highly exposed, on a decent label, and thus present on the shelves of many a record chain in the 80s. But Weinhold has had a long career, performing in a number of acts and genres before even developing her interest in metal music. She performed in some blues and progressive rock projects, and she even once toured with psychedelic masters Amon Düül! As it turns out, Zed Yago was not her first metal band, but instead the ill-fated and short-lived Breslau.

Breslau was one of the earliest German metal bands to actually use German lyrics, and since they were not averse to the use of WWII imagery in their cover and lyrics, they were almost immediately branded as some pro-Nazi act by the same sort of delusional, politically correct witch hunt hysteria we still experience 30 years later whenever the subject is broached outside of some super hero or movie action star kicking Nazi asses. If you imagine it's bad here in America, just think how bad it is in Deutschland! The accusations were, of course, not true, but it's a hard stereotype for a band to outlive, and these poor musicians probably did not want to put up with such drama. Thus Volksmusik would be the sole offering we were going to get here...as Jutta left the project shortly after, and the record label ended it.

Fortunately, it would be an enduring one, as Breslau wrote in the solid tradition of a Judas Priest, Girlschool, Motorhead, Deep Purple, Rainbow and Black Sabbath! Pure, old school heavy metal here, with a slight but notable punk pep to it. This younger Jutta was all the rage, with a glaring energy in her native language that would not often translate on her later work with Zed Yago or Velvet Viper. The riffs are your garden variety, driving rock based in blues and rock & roll, and nothing you couldn't figure out on a fretboard in minutes, but all the same, there is a genuine pulse pounding feel to Volksmusik which doesn't sound a day older even when its' almost three decades older!

The title track makes an immediate break for it, with thundering bass and a burning lead, a brittle and vicious edge to Weinhold's vocals, but it's not one of the catchiest tracks here. "Exzess" is quite wonderful, like a mix of AC/DC and The Runaways, which you can bang your fist to while you light a joint in the off-hand. "Kampfmaschine" is a riot, with some simple punk guitars flowing over the bass, and a great chorus with male backup. "Auf der Galeere" is slow and extremely powerful, and "Spinne" makes for some good, laid back cruising rock and roll. Other great tracks include "Ohne Gesetz" and the speedway ready "Held Im Traum", but really, the whole album is consistent from front to back.

Volksmusik holds a place in my heart for its sincere tones, though its been far displaced by time and a limited public memory. The language barrier is the most obvious, but it's possible some blowhards might pass on the record simply because of its undeserved controversial stature. You may find a slew of instant hit material here, and in fact the record might not shine so brightly as the myriad of stars that exposed themselves in the metal cosmos through the 70s and early 80s. It's a damned shame they were cut so short of their prime, because despite the serious lyrics, this was party metal that should immediately evoke nostalgia in all but the most jaded of 80s hard rock worshipers, whether you speak German or not!