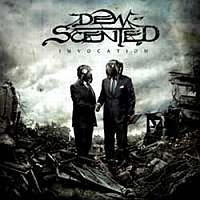 Eight albums deep into their career now, and the strangely named German death/thrash entity Dew-Scented has never grown tired of its gimmick of starting off each effort's title with the letter 'I'. I guess it's kinda stuck by now, and it does at least provide for a talking point, however brief, because there has rarely been much about this band that could ever stick out. They play a modernized thrash metal with old school values intact and a slightly more grisly vocalist than usual in Leif Jensen, but they also incorporate a lot of elements we expect from Swedish melodic death metal acts like the The Haunted or Carnal Forge. Backing metalcore or melodeath vocal shouts, plenty of slam parts and lots of tight leads ensure that the band should be a boon to audiophiles or anyone that just wants to bang their head a little.

Unfortunately, Invocation suffers the same fate as so many of the band's previous efforts. There are some solid riffs to be had throughout the album, in particular "The Invocation", "Global Hysteria" and "Condemnation" had a nice, casual momentum to them that I would have gladly smashed my fist alongside had it not been occupied with a tasty beverage. In particular, "Global Hysteria" moves at a nice mid-pace gait like an Exodus track from the 1987-1990 period. They also include a cover of D.R.I.'s "Thrashard" which sounds a little more fuel-injected in their capable hands than even the original. But there is a lot of weaker filler here, some of which is all too derivative. The rolling intro to "Arise from Decay" sounds a lot like the intro to Sepultura's "Mass Hypnosis", for example, if not the same muted note. Tracks like "Artificial Life" break into some very generic, mosh grooves which provide almost nothing interesting that you haven't heard a million times already.

If you've already got a wide variety of thrash metal to choose from, even death metal hybrids, there would be very little impetus to place this anywhere but back in the bargain bin. The riffs are simply not as interesting as their influences, nor many of their contemporaries. Dew-Scented have offered us better in the past, far better in fact (Inwards and Impact both smite this record, though they are musically quite the same), so I cannot honestly offer a recommendation to anyone save the most jaded fan of The Haunted, Carnal Forge, Hatebreed, or the few most recent albums from Exodus and Slayer. 'Those are hardly inspiring comparisons!' you say to me? Exactly! Now, I return you to my regularly scheduled beverage.