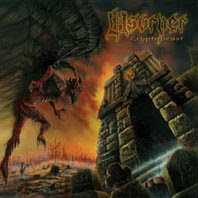 Cryptobeast is the 2nd album Usurper recorded for Earache records, and also their final studio outing. The band brought on a new vocalist here, Dan Tyrantor, who has a pretty different voice than General Diabolic Slaughter. I dare say, Tyrantor sounds a little like a more bruising, death obsessed Phil Anselmo, or a bloodier cousin to Crowbar's Kirk Windstein back in that band's prime. He's not necessarily an awful frontman for this band, and when he breaks into a growl, you can feel the death metal power coursing through your skull, but I'm just not into the swagger I feel when listening to most of his vocals here, and I felt a little of the buzz die inside, really missing Slaughter's performance on the first few releases.

On the other hand, musically, Usurper has polished itself up and delivers a far more aggressive, exciting set of tunes than one found on either Twiilght Dominion or Necronemesis. They come out fighting on a few songs like "Bones of My Enemies", "Return of the Werewolf" and the very Deicide-like, blasting death metal of "Supernatural Killing Spree". A few of the mid paced tracks like "Wrath of God" deliver these massive grooves which feel like a mid point between Bolt Thrower and a brutal hardcore, complete with repeated gang vocal shouts. "Cryptobeast" is the fastest, most purely thrashing element of this album, and I also enjoyed the eerie yet warm atmosphere of the instrumental "Ectoplasm". "Reptilian" doesn't do much for me musically, as it's a very chug hardcore song which reminds me somewhat of Hatebreed with a doomier sounding breakdown. But I like that they tackle the old conspiracy theory of the reptile humanoids that are hidden among us!

Alas, the band once again incorporates a pair of 'WE ARE METAL' songs here. The first, "Kill for Metal" features some cool, swerving bass and classic, dirty speed metal riffs, and really all is well until the dopey lyrics arrive. When did this band decide they were going to become the death metal Manowar?

Arising from an electric Hell
Usurper casts the decibel spell
Annihilation of the false and weak
Metal shall inherit-death to the meek!

It is not alone, joined here by an update to the song "Warriors of Iron and Rust" from the Necronemesis album, subtitled "Battalions of the New Millenium". Ever wonder what the original would sound like with a more panterrible death metal singer? Here, sate your curiosity on this abortion. It's a shame, because yet again, the music itself is pretty sick, with Scythe and Necromancer delivering more passion than the previous edition. Among the rest of the lyrics, which deal in cool subjects like Gaelic myth and warfare, these two tracks stand out like swollen, ugly pimples in need of a popping.

This is the gist of Crytobeast. An energetic outpouring from a rabble that had seemed quite subdued on the their two previous albums in the 21st century, but ultimately failing to impress solely on the basis of the majority of the vocals and the two 'metal' tracks. It's a goddamn shame, because the guitar tone is like the jet fuel of an Abyssal airline, burning hellishly through the night sky as it delivers the souls to the underworld. These strings burn. As I've stated, Dan Tyrantor is not exactly some shitty, half-assed replacement, but I just feel his style better fits a metalcore or groove metal band, and its presence here often rapes the music's potential. The overall quality thus falls once more below to the middling realm of mediocrity.