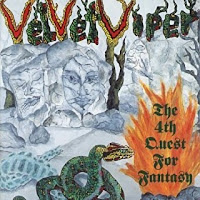 While the cover to Velvet Viper's s/t album was bad, nothing could prepare me for this outrageous fucking eyesore. Seriously, how does a cover like this pass customs? I can understand laxness. I can even understand procrastinating until the last possible moment and having to come up with some desperate substitute to a real album image, but this is truly terrifying. One glance at its sloppy coloring book aesthetics and I want to dive beneath my bed and never come out. Fortunately, Jutta Weinhold has not lost her chops on this, the fourth album in what you might consider the 'Zed Yago' quartet (beginning with Zed Yago's From Over Yonder and Pilgrimage, and continuing into this newer incarnation/band.)

This is a more face rocking, forceful effort than the s/t Velvet Viper, and perhaps part of this is owed to the lineup change. Both guitar players and the drummer from that album have departed, and here they are replaced by a pair of gentlemen from the short-lived Bubi the Schmied project, which featured none other than Bubi (aka Claus Reinholdt), the Zed Yago drummer who did not appear on Velvet Viper. He is joined by his Bubi mate Roy Last on guitar, and surprisingly, as a 4 piece this sounds a lot more frontal than its predecessor, though it continues to walk that fine line between classic 80s hard rock/traditional metal and the power metal scene that Accept, Judas Priest, and Helloween had erupted across Europe.

Yes, the key word is 'power', and almost all of The 4th Quest for Fantasy involves an interesting, well crafted attention to heavy rocking that would sound superb with Jutta's voice soaring across the top of an arena-sized audience. The cornball opera intro "The Valkyrie" seems a little dopey, but after that it is (mostly) smooth sailing. Tracks like "Forefather", "Modern Knights" and "Horsewomen" all move at a similar, slow rock pace, but they also tear the roof out, with sledge hammer guitars, Bubi's simple but effective warlike kit pummeling, and just a sense of fun and energy that was slightly lacking on the previous album (which just felt like a loosely knitted extension of the Zed Yago efforts). In fact, if this album suffers, it is because too many of the songs use this same, plodding tempo: "Highland Queen", "Mother of All Voices" and "Stella" are all further examples. The closer "Trojan War" is a nice shift from a mellow intro ballad to a good steady rock with glorious chorus, and "Ancient Warriors" is what might occur if Jutta started getting creative with a Judas Priest cover band, but I did feel like the album could have only benefited from a wider range of speeds.

Still, if you can ignore the cover art, or better yet, INCINERATE it at the next available opportunity, and shut your brain off for some big sounding heavy metal with one of the finer female singers the genre has ever borne, you may very well squeeze some enjoyment from The 4th Quest for Fantasy. It's not at the level of Pilgrimage, as the riffs and vocals do not combine at the same level of memorable quality, but one could imagine some of the material here mixing it up quite well with the older songs in a set list. For 1992, an age in which this genre was all but interred at the local cemetery, I can think of far worse examples of torch carriers!