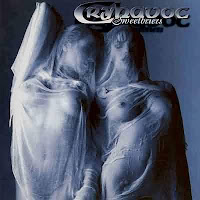 I am a huge, huge fan of Taneli Jarva-era Sentenced, both the earlier death metal efforts and the transitional phase that included both the brilliant Amok album and the following Love & Death EP, both released in 1995. The fusion of growled, passionate vocals, depressive, gothic Romanticism and melodic metal that draws influence from both the melodic death of Swedish bands and classic rock and metal influences was a rare one, and naturally I've always sought out bands that relived this sound, or tried to expand upon it. There are a lot of obvious similarities to this period of Sentenced in the more mainstream goth metal acts like H.I.M. or Charon, but few had that exact mix of styles, with the exception of Jarva's newer band, The Black League, whose debut somewhat mirrored his later tenure in his alma mater, and another band that arrived on the scene some a few years post-Amok: Cryhavoc.

Sweetbriers was the band's debut, released through Spinefarm in 1998, and sounding a fuck ton similar to their more famous Finnish cousins. I'd place the riffing of this album somewhere between Amok and Down, or rather, try and imagine Sentenced had recorded Down with Jarva still at the helm instead of Ville Laihiala. Presto! Cryhavoc really knew how to get your attention with the cover art for this, and much like the sad, lusty curvature implies, the album is a twisting cup of sorrow with rock out riffs and a glaze of both leads and clean guitars that sound nearly identical to what their countrymen were writing. Unfortunately, though their approach is sufficiently dynamic and morose, very few of the tracks here actually warrant much further inspection. The leads and melodies are simply not as ingratiating as those of Sentenced, and though Sweetbriers rarely if ever hinges on boredom, it's simply not an album I ever found much desire to return to, aside from another glance at the cover...

Is it merely skin deep? Hard rocking tracks like "Bloodtie" and "Wolfdance" certainly pack enough punch to bang your head and lament your late, lost love, or at least celebrate your present sweetheart while you swill deeply from the spirits, the former being one of the bright spots on the album, with a lot of atmosphere tucked into its riffing. "Armageddon Y'Know", "I Fade Away", and "Pagan Uprising" are likewise exciting, and in fact vocalist Kaapro Ikonen gets fairly aggressive on "Armageddon Y'Know", which makes up for the rather average riffs. "Repent (Whore)" sounds a lot like something that would appear on Down, with clean guitar intro and then slowly rousing, dense lattice of chords that shimmer off into empty bottles and hearts.

But even at its most exciting, Sweetbriers feels like a pale imitation standing in a shadow, and their songs are never as intricate as, say a "Phenix" or "Forever Lost". As they say, the devil is in the details, and while Cryhavoc is a competent and somewhat intricate band, the nuances feel more like the sidereal saturation of an existing product rather than a genuine, emotional downpour. The album following this, Pitch-Black Blues, follows a similar path, but it feels ever so slightly more unique than this material, and the songs and production simply make for a more memorable offering. As for this debut, I can't really recommend it unless you desperate crave a rather half-witted memorial to a far better band and their enormously superior albums. For the purpose of sampling their cuisine, go with Pitch-Black Blues instead.