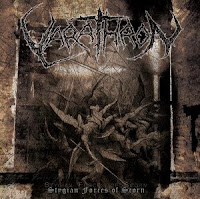 Varathron are one of the original occult black metal bands out of Greece, and stand as minor legends alongside their countrymen Necromantia and Rotting Christ. In the past decade, their output has been rather widespread, with a nine year gap between Walpurgisnacht and Crowsreign, and another half decade until this. Fortunately, there has been no impact on the quality of music the band is releasing: black metal with some melodic and symphonic elements, a dark and ethnic pulse coursing through the sinister veins.

"Behind the Mask" opens with a grim, epic choir, soon consumed in an onslaught of melodic riffing and harsh vocals which straddle the fence between black and deathstyles. "Legends of Demusar" follows with some percussive riffs below a descending, fallen angel choral pattern. I loved the balance of Necroabyssious' vocals behind the verse. "Legends of Profane Wrath" begins with some fine, melodic chugging not unlike mid-period Rotting Christ. Though the album has many memorable moments, some of my other favorite tracks included the sorrowful "Where the Walls Weep", the epic "Lord of Illusions" and the cruising melody of "Sacred Ahlat".

The album sounds extremely cool, with crunchy guitar rhythms and melodies that pop straight out at you. The bass weaves beneath the compositions like a mystic weaving his fingers into occult magick, and the vocals kick ass. Stygian Forces of Scorn is on par with most of the band's back catalogue, so whether you're a long-term fan or into fellow greeks Rotting Christ I'd advise you check this out.