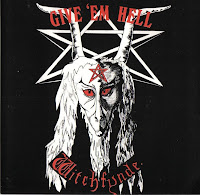 Though the band is often criticized for using sinister, occult imagery on their records which the music itself doesn't seem to support, there can be no denial that Witchfynde produced some damn fine heavy metal records in the early phase of their career. Specifically, the first four albums, of which the two 1980 efforts were their best. Give 'Em Hell was one such effort (the other being the great Stagefright), and it's a good start for the band, with some excellent guitar work, and fantastic production that remains fresh to my ears in 2009.

Witchfynde was neither as heavy as Venom and Iron Maiden nor as radio starved as Def Leppard and Tygers of Pan Tang; they compare more favorably to the styles of Saxon, Diamond Head and Girlschool. The riffs on tracks like the opener "Ready to Roll" and bluesy Joan of Arc tribute "The Divine Victim" are fantastic, and the title track "Give 'Em Hell" is pure heavy metal. Slower tracks like "Leaving Nadir" and "Unto the Ages of the Ages" are dark and mystical, yet laden with the bluesy rock traditional of 70s ballads. "Pay Now - Love Later" is a smutty, catchy hard track, and pretty much the only song of the seven that I didn't fall for was "Gettin' Deavy".

The vocals of Steve Bridges are cruel and cutting though melodic enough to compare with other big NWOBHM singers. What I truly love are the guitars, which are always ready to spring something cool on you, like the ringing chords in the middle of "Pay Now - Love Later" that arch over the ascending bass scale. Though the afficionado of early heavy metal will appreciate the tone and writing of this album, and Stagefright, they might be difficult for younger metal fans who are only accustomed to modern studio efforts and blazing power metal. But if you yearn for something sincere and almost 30 years old, Witchfynde (at least their early work) does belong in the pantheon alongside by Judas Priest, Iron Maiden, Venom, Saxon, and Motorhead.

Highlights: Ready to Roll, The Divine Victim, Unto the Ages of the Ages, Pay Now - Love Later