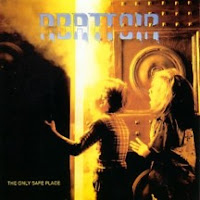 With one decent album under their belts (Vicious Attack) and an album cover that Fallout gamers would die for, California's Abattoir was poised to become one of Combat Records' harder hitters with their sophomore effort The Only Safe Place. Melodic and fast, but raw and heavy, they had a style which could bridge between the traditional heavy metal sect and the emerging thrash fanatics of the period. Unfortunately, it just wasn't meant to be, and this was the band's final full-length effort, though they've reformed and still exist today.

The Only Safe Place sounds fantastic even by today's standards, I with metal albums still had a tone like this. Mike Towers' vocals were similar to John Bush (Armored Saint and later Anthrax), but higher pitched. They had a melodic body but a sharp edge that could cut you. As for the writing, it's solid if not exceedingly catchy. "Nothing Sacred" is a pounding mid-paced anthem with some bluesy influence. "Night of the Knife" is good riffy melodic speed metal with a Maiden influence. "Hammer of the Gods" is a thrashing track fit for the pit, and others like "S.B.D. (Feel the Fire)" and "Temptations of the Flesh" are hooky enough 80s anthems. The lyrics were average for the time, often meaningful, though some still hang on to the hair metal S&M aesthetic of dirty 80s metal. Despite its great mix and potential, not a lot of the tracks were memorable, but if you are into similar West Coast speed metal from the 80s (Agent Steel, Armored Saint, etc), it's certainly an album worth hearing.

Highlights: Nothing Sacred, Night of the Knife, Hammer of the Gods