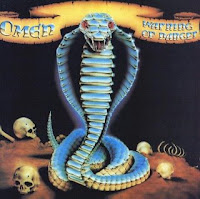 Omen was one of those reliable bands who fleshed out the Metal Blade Records roster in the early to mid 80s. You could not go wrong with the band's first three albums, all positive uses of the Maiden influence, taking the lessons taught by that band and applying them to a heavier style with J.D. Kimball's distinct, deep vocals. Until they released the questionable, somber (though not bad) hard rock record Escape to Nowhere, they were really on top of their game.

Warning of Danger was their 2nd album, and a melodic juggernaught with a powerful bottom end, each track a thundering hymn with a soaring chorus. The title track is perhaps the most distinct, and a great choice to open the album. Kimball's vocals were really like no other, and the rhythm guitars flow into the explosive chorus, with some great drumming from Steve Wittig. Other memorable cuts include "Don't Fear the Night", with its balladic intro, "Termination", which is the heaviest track on the album, and the rousing "Red Horizon". The remainder of the tracks are at the least consistent, there is nothing to scoff at. The mix is even, in Maiden fashion you can hear the bass pummeling clearly and though Kimball stands out the most, the drums and guitars are fairly loud. The lyrics are average, nothing I'd want to quote. Overall, the album is the same quality as their debut Battle Cry, but I'd give that one a slight edge out of sheer nostalgia.