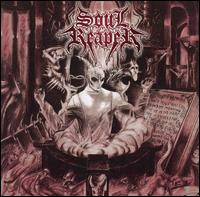 What to do when your main band, Dissection, is taking a hiatus for years rather than reaping the rewards of its enormous popularity and potential...let us think upon it. I've got it! We'll create another band which is nearly as good as what that main band has already accomplished, and superior to anything they would put out in the future. Written in Blood was the first of two records from the Swede's Soulreaper, and while the weaker of the two, it was a successful blitz of blackened death metal to which many heads could roll off the chopping block. Though it featured two members of that band, Soulreaper was more about ass kicking than atmosphere, and to that effect, this is a highly successful record.

"Darken the Sign" is a nice thrust of occult death metal with some blazing riff patterns, but for myself, the album really begins with its title track, noisome synths that wind into a sinister, slow black metal riff, which slowly gains force and speed until it morphs into grinding death rhythms beneath the horrific verse.

Underneath the soil
Were the ones who'll never will fall
The superiors of distinguished damnation...
Damnation
A pandemonium builds up inside
Fearless I stand with darkness strong by my side
A epoch of hallowed lies falls towards a shapeless ground
A solemn night, to unite with a oncoming destiny

"Satanized" and "Seal of Degradation" up the brutal ante of the record, the latter being one of the better tracks here, with a combination of sadistic old school rhythms, and brutal fast paced breakdowns. "Ungodly" is a fast paced grinder, not one of my favorites, but "Subterranean Might" makes up for it with some subtle blackenings that weave through the bottom end bludgeoning. The album ends with the 7 minute "Labyrinth of the Death Lord", aggressive and worth a few bloody noses and broken bones.

Soulreaper's later offering Life Erazer is a better album than this, but it was a fresh, bloodied eruption from a few musicians who needed more work. Competent, aggressive, and complex enough to please fans of Dissection and Sacramentum, as well as diehards for straight up brutal death metal, Written in Blood should probably have made a few more ripples than it did.

Highlights: Written in Blood, Seal of Degradation, Labyrinth of the Death Lord