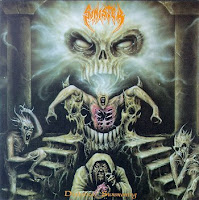 21 years have passed since the formation of Sinister, one of Holland's most persistent death metal acts. Though most of their albums are good, the band have never sadly achieved the level of recognition that many of their peers rose to. It's a shame, because the first few albums are better than the overrated early 90s output of a Deicide, Hypocrisy or Cannibal Corpse. I can't claim that any of the 8 Sinister albums is a masterpiece, but Diabolical Summoning was certainly a Dutch gem which stands alongside Pestilence, Creepmine and Gorefest as a strong offering to the genre.

For the period, Sinister were quite a tight and unrelenting band. Diabolical Summoning pops with aggression, whether it's the sick fuck drumming of Aad Kloosterwaard, the unending axe brutality, or the gruff barking of Mike van Mastrigt. The band was every bit as moshpit friendly as their American counterparts, with alternate bursts of speed and breakdowns, very much comparable to an early Suffocation or Cannibal Corpse, and for this album, better. Tracks like "Magnified Wrath" and "Sense of Demise" groove with abandon, hellish battering and bludgeoning tones that sound heavy as fuck even by the standards of the 21st century. The album grows a little more interesting during its latter half, with the punishing "Leviathan", the riffy, grinding "Desecrated Flesh" and the mystical destruction of "Tribes of the Moon".

Diabolical Summoning is sick, sick enough that any fan of brutal death metal, whether past or ultramodern, should own it and relish its insanity. The riffs are consistently entertaining, and leads sear and the drumming should hold the attention of the more ADD brutes who demand it. I would say this still ranks as my favorite Sinister album.