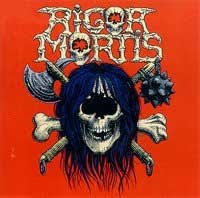 Another casualty of the early 90s, Rigor Mortis were very far up the ladder of bands that had the potential and underground popularity to explode into the next Slayer or Metallica. Their self-titled debut in 1988 is a well-loved slab of sadistic, high speed thrash metal, and the only release of the band that I really liked.

Rigor Mortis is pretty damned heavy. As a starting point, take the rapid picking of Slayer and add a layer of musical proficiency to the evil rhythms this creates. "Welcome to Your Funeral" is a 3:30 track which showcases the band's instrumental abilities, in particular the guitars with their infernal desire to shred. After a flowing, fast acoustic segment, "Demons" will introduce you to the brutal vocals of Bruce Corbitt, reminiscent of Sacred Reich and Nasty Savage but a little darker. "Bodily Dismemberment" follows, an amazing song, probably the best on the album, for its opening tapping rhythm, and the grim, celebratory gait at which it marches forward, with walls of crashing rhythms and lyrics that libate the perverse, serial killer.

There's no need to worry bitch, just lay there and relax
And as you reach your climax I'll be reaching for my axe!
With five easy slices, you're in six lovely pieces
Bodily dismemberment as passion increases

Pretty intense lyrics for 1988! Remember, this is before the full-blown death metal scene produced a thousand, dime a dozen gore bands with lyrics about Ed Gein and Jeffrey Dahmer in the following decade. Most of the lyrics here are based on horror films. "Condemend to Hell" is another of the record's sickest tracks, with a fantastic, glorious thrusting rhythm guitar. "Wizard of Gore" has a great acoustic intro, and then more of the band's frenetically paced, tappy guitar lines. Two of other highlights are "Shroud of Gloom" and the final track, "Slow Death", which races past at blinding speed.

Rigor Mortis may not have transcended their underground status, but at the least they gave us this one fine release. The following Freaks EP and their later Rigor Mortis vs. The Earth album did little for me, and the band soon parted, with members going to GWAR and Ministry, among others. A few years ago, the band got back together for some small tours and shows, and I assume they still exist for that purpose, but whether or not we'll get a true successor to this album remains in doubt.