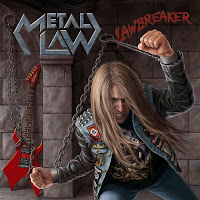 The cover art makes it quite clear what you're getting into with the follow-up to 2007's Night of the Wolf, but if you're reading this review in braille then you are listening to Metal Law, a traditional metal band from Germany who sounds like one part Manowar, one part spread out between a whole host of old German influences (Accept, Stormwitch, etc), and one part that dabbles in the modern, melodic power metal genre. Lawbreaker is a pretty raw record, with crunchy guitars and almost a live, garage jam effect, and while some might consider this 'unpolished', I felt that it gave the band a little extra charm.

Don't fret, for it's still quite balanced and all the instruments are more than present here, from the scintillating acoustics and organ of the bridge in "Crusaders of Light" (very Manowar), to the heavy metal balls rock of "Lawbreaker", to the melodic anthem "Between Dark and Light". As usual, I prefer the band when they actually write darker songs like the cheesy "Open the Gates of Hell". The album is loaded with intentionally horrible lyrics, but honestly, if you've made it past the cover then you're already locked in. I was quite happy with Lawbreaker; it's far from pretentious, just a slice of loyal heavy metal from fans of the classics, and though it has similarities to its influences, it never fully rips off anything (Karsten Degling may sound like Eric Adams, but he's got a dirtier tone to his chords with his accent). If you can shove your tongues back up into your cheeks long enough, you'll probably have a good time with this.

Highlights: Between Dark and Light, Metal Law, Open the Gates of Hell