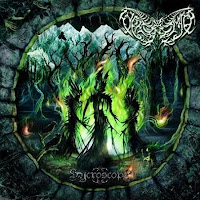 Symphonic black metal in the vein of Dimmu Borgir or Cradle of Filth has not seen much of an upswing, while many other genres have thrived in recent years. Still, some bands hang on defiantly to the hopes that this genre can produce another conquest, and German Sycronomica are one of them. I never caught on to their previous albums Paths or Gate, and despite a strong effort here, I did not derive much enjoyment from Sycroscope.

That doesn't make it a bad album, however. Oliver Walther (also of Festering Saliva) has a powerful, rasping throat which covers the music like a horde of black-winged angels about to descend to the mortal realms for war. The riffs are loaded with folk-like bounce and swagger, and the band shifts up tempo often enough that the songs never feel dull or flat. The synths are what often drag me down here. At times, they swell with bombast and convey epic emotion and atmosphere to the metal riffing. At others, they sound cheesy, and not in a good way. I can bear them in the King Diamond-like intro to "An Der Schwelle", where they craft the proper horrific embrace. This is also one of the better tracks on the album, which recalls symphonic Emperor and Dimmu Borgir. Other strong points include the glorious "Ground on Fire" and the driving, melodious "Embers".

There is enough of a folkish playfulness to the writing that fans of pompous pagan metal (with keyboards) might find something they like in the album. Most of the components of the band work well, but I think some more balance in the keyboards would go a long way, and the guitars could use some more catchy writing, for half the album they just chug along with mediocre riffs below the atmosphere of the vocals and keyboards. A few solid tracks dominate the album, but not catchy enough that I'd want to revisit them often. Good cover art, by the way, it does capture the spirit of the music.