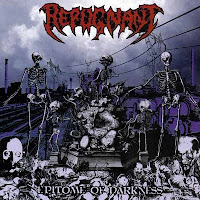 Sweden's Repugnant debuted in 2006 with Epitome of Darkness, and it's a pretty apt album name. Immediately eerie riffs unfurl around you and pull you into the the music's clawed grasp. It has that signature Swedish death metal tone, although with less punchiness of an Entombed or Dismember, opting for a flatter, thrashier production that sounds more like it's out of '89 than '09.
"Hungry Are the Damned" is the opener, and holy shit, did it hit me between the eyes how good this band is when I first heard it. A slow intro gives way to a furious buildup of energy, climaxing in what sounds like a ghost train or some kind of banshee wail alongside crashing percussion.
Rise again to bathe in crust, dwelling in perverted lust
The likes of me are taking over, rage across the land
Beastly ones are in command
And hungry are the damned
Up from a shallow grave
Clotted blood is what I crave
An apex predator
Always hungry for more
Slit your throat and you'll see
Reborn in morbidity
Just like me
Following this verse there is a breakdown in time with rapid high strings emblematic of old slasher flicks, followed by a guitar solo and change that would not be out of place in Running Wild's golden era. The album is chocked full of furious and expertly crafted moments like this, combining horror brushtrokes and shredding that is just a pleasure to listen to, recalling Death and Swedish death metal titans, including the aforementioned Dismember.
Tobias aka Mary Goore puts on an admirable vocal performance, his menacing growl fitting perfectly with the music. The second track "Premature Burial" legitamately scared the shit out of me, as being buried alive is pretty much the scariest thing I can imagine. With a Plasma-esque bubbly vocal effect making him sound like Death himself, I picture in my mind's eye Goore standing over my mutilated body reciting this:
Panicking yet you're paralyzed
Claustrophobic wooden cell
Screaming silent and voiceless
If only you could burn in hell
As you could've guessed, I fucking adore this album. The songwriting is almost spotless, the music is the right there with it. Unfortunately Repugnant were splitsville long before Epitome of Darkness was even released, and to my dismay I've never heard anyone do horror themed metal quite this well, although Crypticus and Tribulation give them a run for their money.
Highlights: Hungry are the Damned, Premature Burial, Draped in Cerecloth, Another Vision
Verdict: Epic Win [9.75/10] (nosferatu inside of you and me)
http://www.myspace.com/epitomeofdarkness
Posted by JD at 11:55 AM

Anyone who uses the words 'apex predator' in a metal song is owed at least one drink, on me.