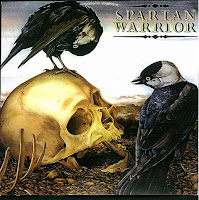 Spartan Warrior were one of the heavier bands to emerge through the NWOBHM, and even though this second, self-titled album arrived as that movement was morphing into its new faces (speed metal, power metal, thrash metal, etc), it's a steady offering with enough class to invoke the inner 'banger in any stubborn old man, and preferable to the debut Steel 'n Chains.

Most of the tracks on Spartan Warrior plod along at the same middle pace, glazed in the vocals of Dave Wilkinson which are mid to high ranged but never annoying. The lyrics are dated and fairly typical for the band's day, but overall the album gives off that blue collar, hard working middleman vibe ala Saxon. In fact, this album is most going to appeal to fans of records like Power & the Glory and Crusader. If this is your cup of tea, then dive on in to experience the charms of "Assassin", "Black Widow", "Sentenced to Die" and "The Mercenary". If you want mildly cheesier fare that flirts with comparable riffing, you have "French Girls" and "I'm On Heat". Spartan Warrior weren't out to re-invent the wheel on this record, there is nothing impressive about what they offer (today or 25 years ago), but Spartan Warrior is another of those albums that can transport you back to a time and place and fondness for a particular sound that you no longer hear.

I'll also point out that the band re-united a few years ago and plans to release their new album Behind Closed Eyes soon.