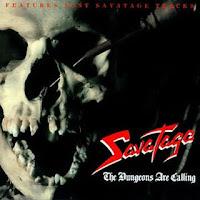 Time may not have been kind to Savatage, as numerous tragedies (the loss of amazing axeman Criss Oliva, the temporary absence of songwriter extraordinaire Jon Oliva, and the hiring of the well-meaning but mediocre Zach Stevens) flubbed up the band's impressive body of early work. But there was a time when the name Savatage resounded with glory, in particular the first crop of records up to and including Hall of the Mountain King. Before cutting their teeth on rock operas and concept albums, Florida's best known metal squad were creating rough and ready, old school power metal with Jon Oliva's distinct vocals, and writing to die for.

Look into my eyes, I'm poisoning you
I watch as you grovel in my stew
I'm bastardized, cursed by sin
Come on down to Hell, watch the flames begin

The Dungeons are Calling EP was a product of the band's Combat Records years, and a followup to the excellent debut album Sirens. The material is quite thoroughly memorable and awe inspiring while almost managing to compete with the heavier bands of the day (Venom, Onslaught, Slayer, etc.) due to its dirty, subterranean atmosphere. Almost of the tracks rule, from the epic "Dungeons are Calling" to the melodic, unforgettable "By the Grace of the Witch", "Visions", and incredible "City Beneath the Surface". The exception would be lame boogie of "The Whip". If you've gotten the more recent release of the EP, it comes with a meh bonus track in "Fighting for Your Love" and a live in Germany version of "Sirens". Obviously this band needs no introduction to the seasoned metalhead, but if like grimy, old school meta dirt then you need to acquire this alongside Sirens, Power of the Night and Hall of the Mountain King.

Highlights: Dungeons are Calling, By the Grace of the Witch, Visions, City Beneath the Surface