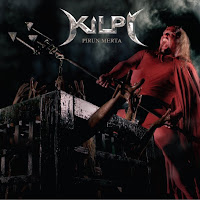 Album cover of the year?

Kilpi (Shield) are one of Finland's premiere native speaking heavy metal bands, but despite their adherence to traditional metal of the 80s, the modern production and bold vocals of Taage Laiho keep them current, certainly toe to toe with most of the plague of 'retro' bands that have chimed up in recent years. I still hold up their 2006 record Kaaoksen Kuningas as their very best album, but Pirun Merta comes close to reaching that height, surpassing it's predecessor IV in the process.

Kilpi do one thing and they do it right: simple, melodic heavy metal songs which hook you like most of the big rockers and ballads of the 80s. They don't shy away from the hard rock cheese (I refer you to the verse vocals of "Viinapiru" or the big arena cock rock of "Aina kun sa lahdet pois"), but all their songs are solid and feature bits of classic NWOBHM-influenced riffing and melodic flair that will warm the hearts of old schoolers. The band does border on power metal through a number of the tracks, in fact some probably consider them power metal, and it's hard to deny with the raging "Uuden ajan mestarit" or the clear Judas Priest/Accept influence on "Pahan ilman linnut".

The bottom line is that Kilpi are great at what they do. They've got all the right influences and attitude to hold aloft the metal torch and keep it lit well into the cold Finnish winter. The mix on the album is top of the line. Fans of heavy metal tribute bands like Hammerfall should check this band out, despite the language barrier, which is probably the only thing holding the band back from being better known. But even if I don't speak it, it's one sexy tongue, and this is another pretty slick album.