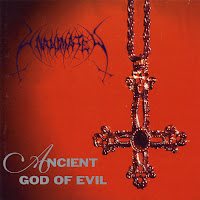 Although I remember Ancient God of Evil as one of the better albums in the first wave of melodic Swedish death metal, it has never been my personal favorite from Unanimated; my cravings lean towards their debut In the Forest of the Dreaming Dead, and their recent reunion effort In the Light of Darkness is probably better than both of them. Having recently gone back to revisit this record, I can say that, while competent and wonderfully mixed for its day, it's loaded with the sort of melodic riffs that just don't stick with me.

Fortunately, the album is also pretty heavy, and the band's use of acoustics and atmosphere on some of the tunes really lend it a depth that many of its peers did not possess. A few examples would be "Ruins", which starts off with a creepy but wondrous melodic line with some synths, then bursts into a raging, if simple verse rhythm. "Mireille" is a tranquil instrumental, opening with acoustics that flow into some electric guitars. Most of the straight, heavier fare is passable, a mix of the melodic and profane aggression, such as "Dying Emotions Domain" and the driving "Oceans of Time", but nothing stands out very far when you compare this album to an Elegy or Jester Race.

The silent years of helpless crying
The bridge of hate travels in my mind
Beyond all the doors of gruesome hunger
I hear the threnodes, i behold

The album maintains a large cult following, probably due to the fact the band never really 'sold out' or changed its style, like some of their peers. Though I respect it, I don't hold it in quite that much regard. It's a pleasant listen and sounds quite good even now, but there is nothing really memorable about it. Just a good album, lost to all but a few. And the title is a little misleading.