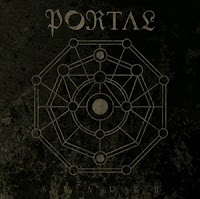 Portal is one seriously disturbed band, but if you consider the genre, this could only be a positive trait. From the band's bizarre but fantastic headpieces to their frolicking, dour brand of noisy, turbulent death metal, they offer an experience which is both a challenge to comprehend and a pleasure to discover. Swarth is the band's third full-length album and, like its predecessors, original. Imagine death metal being broken down into a frame of primal chaos and then re-assembled into a structure of percussive super sludge. Then add various ominous sounds (chimes, bells) into the backdrop for effect, and add molasses. This is Portal.

Though Seepia and Outre' were mindbending, complex albums in their own right, I was not smitten with them as I am with this record. "Larvae" is just a phenomenal track, some of the most unique death metal I've ever heard. "The Swayy" is a savage conglomeration of choppy, bewildering riffs which grind you to the very edge of sanity. "Omenknow" is strangely melodic, with a traditional charging rhythm interspersed in the band's chaotic diatribe. I would be remiss to not mention that the lyrics on this album are minimal and excellent.

Consider me envious of this band's disorder for wild innovation and spurious elements that fuse together into a very concise, necrotic vision of our very fucked, shared reality, and then realities beyond that. Swarth has delivered for me where the previous albums only came close, and I'd recommend it if you're seeking something far left of the norm, and have an inherent tolerance for finding patterns in your noise and brutality.