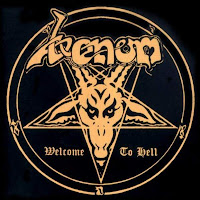 You can write Venom's shock and schlock tactics off at your own risk, but there is simply no denying how raw and filthy the band's sound was in an era which was still reeling from the glam and prog rock of the 70s. Combined with a kick ass stage show and heaps of blasphemy, there was no way Cronos and crew were not going to make some ripples in a stagnant environment which was in the process of exploding with ideas. Maiden might have written about evil, but Venom WAS evil.

So why, then, does Welcome to Hell still stand so strong after nearly 30 years of increased brutality, studio wizardry and entire new genres of metal music? Because if you grasp the branches, follow them down the trunk to the roots, and then pull out those roots from the Earth, you will always arrive at the same place: Venom. So why not tap the source for some inspiration? Though it lacks the overdubs, snarls and grunts of modern extremity, Welcome to Hell still sounds excellent to these ears. Distorted bass, punk as fuck, raging rock rhythms on the drum and guitars that, frankly, sound like they are coming from someone who just learned to play the week before...and that's the appeal! Welcome to Hell is grunge, it is NWOBHM, it is black and death and thrash metal, before any of them.

Somewhere in time we were born,
And brought blood, lust, hatred and scorn,
Your sorry now you trusted me,
Now I command that you get down on your knees

It is impossible for me not to get wrapped up in nostalgia for this record, which is one non stop hard rocking beast after the next. "Sons of Satan" rivals Lemmy and his boys in the pure filth department, this is full on hellish roadkill burn. The title track reigns it back in with a classic riff, that...well...listen to the majority of speed, thrash and power metal bands of the past few decades. You will find this riff on most of their albums. "Schitzo" is good drinking, fucking and fighting metal after a hard day's work at the textile mill. "Mayhem with Mercy" is a nice acoustic tease for the brawny "Poison" to follow, and beat you with its treacherous fist.

Sitting close beside me,
Hand upon my zip,
Don't bother to take it down, honey,
It's about to rip,
She's mammy's little virgin,
Her daddy's all in pride,
But she welcomed me with opened legs,
Kept me satisfied.

A timeless anthem of misogyny? In 1981, that was just good fun. "Live Like an Angel, Die Like a Devil" is a roiling, noisy mass of black hysteria, with Cronos almost losing his voice in his crumbling cracker vocals. "Witching Hour" is rugged and raw, and one of my personal faves on this album, as if I could pick one, but listen to those noisy drums...what a racket! And it does not end there, with "1000 Days in Sodom" and the fist fighting "Angel Dust". "In League With Satan" still sounds brilliant, dark and troubled even after albums like Reign in Blood and In the Nightside Eclipse have come into existence. And the album saves one of its best for last, the spiteful "Red Light District". That is, unless you have the fantastic bonus tracks "In Nomine Satanas" and "Burstin' Out", both of which are great.

Welcome to Hell was a vortex of creativity that spawned countless impersonations. This is pretty much where it all came to a head...the theatrical misanthropy of black metal taking its queues from KISS and running with it as far as possible. Venom has always been controversial and polarizing, but they opened their career with two of the best metal albums in the history of this, or any genre.

Highlights: none of them. all of them.