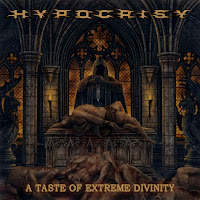 Last year Hypocrisy corrected a previous 'mistake' by re-issuing an improved version of their controversial Catch 22, and as if to beg additional forgiveness from jaded fans, they have now released their best album in...many years. A Taste of Extreme Divinity offers exactly what you want from this band, whether it's the old school, pummeling death metal of their origins (Obsculum Obscenum, The Fourth Dimension) or the more atmospheric touches they would carry with them into the 21st century.

This album may not be loaded with the most memorable riffing of their career, but it is tight as fuck and every song offers at least something to clench your fist or bang your head against. "Valley of the Damned" is a meat grinder, with thrashing rhythms and classic, simple melodies for added depth, in true Hypocrisy style. "Hang Him High" opens with a nicely sampled quote from Richard 'The Iceman' Kuklinski, before rolling out another of the band's myriad slower paced hymns, anchored in sinister grooves, chimes and melodic riffing. "Solar Empire" is another such piece, with some of the best moments on the album. The album continues to shift between this style ("Global Domination", "The Quest") and faster, old school tracks ("Weed Out the Weak", the title track, etc.)

I can't remember the last time I had this much fun with one of Peter Tägtgren's records, and if you're a Hypocrisy fan (from any era), you'll easily find fulfillment. It culls all the strengths of the band's back history and prepares to crumbles the walls of the decade to come.