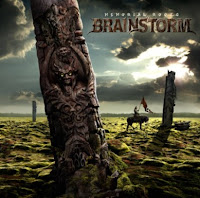 Brainstorm...another of those power metal acts that have been hammering away for many years, producing a body of solid work but never any glint of a truly great album. Memorial Roots is the band's 8th full length, but despite an honest effort, it's not even at the level of a Liquid Monster or Metus Mortis. All the pieces are in place: heavy guitars which never shy away from melody, a strong vocalist in Andy B. Franck, and the willingness to mix up the tracks between softer, progressive pieces and the expected power anthems. The writing simply doesn't elevate itself beyond the average.

I will make the case that the album grows stronger through the track list, once the band starts to let loose and rock. "Forsake What I Believed", "Shiver", and "The Conjunction of 7 Planets" all blow by without much fanfare, but "Cross the Line" delivers a solid, thundering verse rhythm. Even deeper into the playtime, "Ahimsa" is a scorcher with some good classic power riffing, and "Victim" creates a nice, marching rhythm to its own verse, but even these tracks have lackluster chorus parts which do little to inspire.

I suppose if you are a diehard fan for Brainstorm and you buy every record they release, you could find enough to keep you satisfied until a followup. But the album pales in comparison to recent releases from Rebellion, Grave Digger and U.D.O., and if you're just getting into Brainstorm, there are numerous, superior points of entry to their discography than this.

Highlights: Cross the Line, Ahimsa, When No One Cares