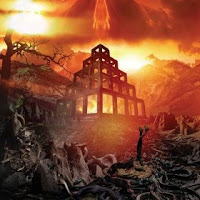 Shrinebuilder is an interesting new project which assembles the various talents of some rather huge figures in the field of drone and doom metal: Al Cisneros (Om, Sleep) on the bass, Dale Crover (Melvins, Fantômas) on the drums, Scott Kelly (Neurosis) and Scott 'Wino' Weinrich (The Obsessed, many others) on the guitars. Vocals are contributed by several members, and the band performs a revelatory stoner doom hyped up on psychedelic atmosphere.

Though the core of the sound is rooted in the typical stoner sludge rhythms that characterize many of the band's contemporaries, it is those atmospheric, psychedelic elements which boost the album well beyond mediocrity. The band thankfully keeps the tracks short enough to appreciate for one such as myself, who can get lost in the boring repetition of a Dopesmoker or some other indulgent stoner record. Every time I felt I was about to run off the track, the songs would change up into a more interesting segment. For "Solar Benediction", this was the minimal, space rock atmosphere conjured by the guitars before the 5-minute mark; for "Pyramid of the Moon", it was the desert chanting that fills the middle of the song. "Blind for All to See" gets by on its flowing bass beneath grungy guitar elements, and of the five tracks, "The Architect" has the best doom riffing and kickass vocals.

Shrinebuilder is a great direction for a genre that has, honestly, grown very stale over the years. So much of what I hear in doom and sludge metal is just boring (slow + boring does not always = heavy or good) and tries to pass on its simplicity and stoner ethics alone, but this supergroup offers a lot of fresh environments to explore. That being said, there are still a few moments of exhausted riffing which pulled my attention out of the experience. It's not a perfect debut by any means, but a solid and interesting effort, superior to many other collaborations I've heard in this genre. And a killer cover art never hurts.

Highlights: Pyramid of the Moon, The Architect

Finally, I've been waiting so long for this!

Good review, though I don't think Dopesmoker is boring. At the same time it takes a certain mood for me to sit and listen to it all the way through.