Frank Darabont is no stranger to Stephen King's fans, nor moviegoers, having been responsible for the big screen adaptation of The Shawshank Redemption, one of the most beloved films ever released, ranking quite high on critic and aggregate all-time lists. Although I didn't enjoy the film quite that much, I do respect it, and Darabont has also adapted The Green Mile. He's also done some decent horror flicks in the past, such as the 1988 update of The Blob.

So it's not much of a surprise that The Mist turned out well. It's in good hands, and Darabont even takes a twist with a finale that author King admits was better than his own version. Though Thomas Jane is the central figure of the film, it's loaded with an ensemble cast of veterans like Andre Braugher, Toby Jones, William Sadler, and Marcia Gay Harden (who rocks in this film).

After a violent hurricane, neighbors David Drayton (Jane) and Brent Norton (Braugher) travel to the local shopping center of their coastal New England town, with Drayton's young son. A mist that Drayton had seen earlier across the water traps the trio (and a few score other townsfolk) in the local supermarket. Though some quick introductions, we are given that 'small town' New England sense of community that is used in most King stories. Horror ensues as those that travel out into The Mist are killed by various, horrific, creates which seem to resemble almost Cthulhoid versions of normal animals (crabs, squids, spiders, etc). The morale of the townsfolk slowly becomes unraveled, and divisive factions begin to form, somer rallying beneath the 'Christian' sin and punishment of local madwoman Mrs. Carmody (well portrayed by Harden).

Things will not end well if Drayton and some of the other 'sane' survivors can't get out of there, so they calculate a plan to escape and drive as far as they can, which leads to some of the most disturbing (and ironically beautiful) scenes in the film. I've skipped a lot in this synopsis, including most spoilers, but that's because I encourage you to see this film for yourself!

The Mist is well acted and rather tense. It's a great situation for a horror story, in which people must face the unknown and their own fears, and I was glued to the screen throughout. The creature effects are decent, including a few of the larger creatures you see in the mist which 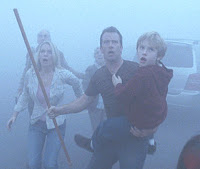 must be amazing. Though some plausible explanations are offered throughout the film for the cause of this homicidal, alien mist, Darabont is wise in not offering any concrete answer. Could the mist have come from a dimensional experiment carried out at the local military facility? Could it be the apocalypse that Carmody preaches of? Could it simply be preying on the fears of those who experience it?

We may never know, and we don't need to! The Mist is a scary film, moreso for its implications than the monsters and small amounts of gore contained within. I expected very little and wound up impressed. The ending is just fucked. And awesome. Darabont has done a wonderful job, and since his next King adaptation is my favorite of his stories, The Long Walk, I am dripping in anticipation.

Love the ending to this movie, although I also love the promise of that gargantuan monster that walks over the car near the end. Could have gone both ways, but being that there would never be a sequel they went the right direction. Just fucking cold