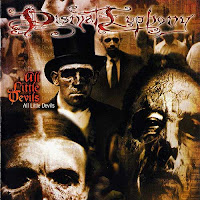 Dismal Euphony would not peak until their 4th and final album, the brilliant and unorthodox Python Zero of 2001, but they produced two respectable melodic black metal albums in Soria Moria Slott and Autumn Leaves. Their third full-length, 1999's All Little Devils, is often lamented as some sort of gothic metal sellout, but this is pretty far from the truth, it's an album that takes the bands roots and adopts them to a more raucous, opera house environment.

My own mediocre reaction to the album has dissipated over the years, and now I consider it their second best release. Most of the tracks are a pleasure to listen to, even if they aren't individually that memorable. "Days of Sodom" is a rousing piece to open the carnival, with its Anja Natasha's vocals being used to a slicing effect over Ole's rasping counter, one of the most catchy tracks on the album. "Rage of Fire" is good gothic black with some nice, Katatonia-like cleaner guitars. "Victory" is another vehicle for Natasha's voice, which wanders through the empty night here almost like the title's imposed victory march. "All Little Devils" is like a gothic girl and a black metal guy on a swingset doing a musical together...

After this point, the album becomes a mixed bag. "Lunatic" is a hybrid of melodic death and black metal. "Psycho Path" is a gothic anthem in which Natasha's lower range vocals have a rather cheesy impact, though not so bad if you're just into bad gothic rock of the 90s. "Shine for Me, Misery" is decent gothic black metal, ditto "Scenario", and the album closes in the somber instrumental "Dead Words". Oh, I get it. Clever.

All Little Devils has a lavish mix in which the vocals can shine without dominating the immense guitars. The symphonic bits (synthesizers) are done rather nicely, but not all of the songs are consistently good. The lyrics all seem to frolic along, but there are a few cringeworthy moments where they come across as cheesy with the vocals. Either way, it's an interesting little record, and Dismal Euphony would more than make up for any misgivings with their swan song Python Zero. Check this out if you want a more blackened version of old Theater of Tragedy, perhaps.