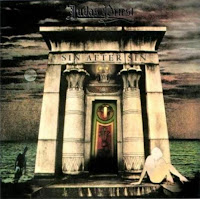 Though many would argue Judas Priest had begun to stagnate in the 80s, content with party rock albums like Turbo or Ram It Down, there was a day when they were far ahead of the pack. With Sin After Sin, the band's 3rd album, they were already crafting the caliber of hard rocking chorus parts that many bands today (32 years after the fact) still cannot mimic. Certainly, the tinny popping drum cadence lodges this record firmly in the 70s, but it is a beast while nary a weak track to be found, and one of the band's greatest albums, which I look back upon with only fondness.

I made a spike about nine o'clock on a Saturday
All eyes hit me as I walked into the bar
And seeing other guys were fooling with the denim dudes
A couple cards played rough stuff, New York, fire island
I cased the joint, straining at the scenes

When you open a record with the unforgettable "Sinner" and Rob's clinically excellent, surgical vocals, you cannot fail. The Joan Baez cover "Diamonds and Rust" is melodic and soothing, each line delivered with clarity, the guitars and bass plodding gently below as Halford delivers you into the sky. "Starbreaker" delivers AGAIN, with beautiful vocals and a primal, shuffling beat, plus the immortal hand clap! Even when Sin After Sin steers into balladic territory with the "Last Rose of Summer", it does not falter, though I'd say it's one of the least interesting tracks on the album. "Let Us Prey", "Call for the Priest/Raw Deal" and the amazing "Dissident Aggressor" truly round out the album and bestow it unto history as one of the best Priest would ever record, a worthy prototype and inspiration to so many bands to come.

The production was top notch, the lyrics well written and even 'hip' (for Priest), and the songs were carefully balanced and crafted to provide an entertaining experience. This was when the concept of the 'album' reigned supreme. Whether you listen to this on crackling vinyl to wax nostalgic about your not so innocent youth, or discovering it for the first time, you can begin to understand why this band made such a huge splash, a splash that has yet to dissipate.

Highlights: almost every song on this fucking record, now run along!