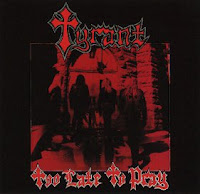 There have been many bands to don the name of Tyrant throughout the history of metal music, most notably the old school German power metal outfit and this American band. This Tyrant performed a dark, crushing brand of heavy metal music which is rooted in the pure NWOBHM and speed metal filth of the early 80s. Notable are the heavy vocals of Glen May, which sound like a cross between Venom and Cirith Ungol, with some additional higher range lines thrown in to create a multiple stage assault.

Too Late to Pray is the band's second album, and it's got an air of oppression about it. Coupled with the band's tendency towards slower, driving material, it would certainly appeal to doom metal fans that are looking for a tradition fix, but there are enough uplifting moments to register with classic power metal fans. The album has some very strong tracks, such as the elegaic "Valley of Death" which cries sorrow all over the dirty veneer of the album, then breaks into some heavier moments near the end. "Babylon" is very atmospheric and reeks of mid paced doom, I can picture leather, spikes and warfare. "Bells of Hades" features the signature bells and another tasty number with the mix of heavier and melodic vocals. The lyrics throughout the album are sufficiently immersed in the occult or grim religious themes.

The pain, the pain, the inescapable pain
The smell of burning flesh and bone
Is driving me insane
In hell there are no flames
You burn from within
Strapped to the altar
The black mass begins

I'm not sure where I'd place this record in comparison to their debut Legions of the Dead. I like them both about the same, though Too Late to Pray is the more oppressive, and 'heavy' of the pair. Neither album is perfect, but they have a ghastly charm which remains to this day. If you're looking for a combination of the Venom or Possessed occult aesthetic with a slower, pounding style akin to Piledriver or Anvil, this is certainly a lost classic you should hear.

Highlights: Valley of Death, Bells of Hades, Beyond the Grave, Babylon