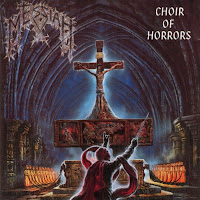 Though I tend to associate the Swiss metal scene of the early 90s with Celtic Frost and Coroner, they were not the only bands making headway into the international scene. Death/thrashers Messiah were at it for years, forming in 1984 and producing a series of albums and short releases that bridged the band from a thrashing core to a more death-laced impact. Choir of Horrors was their third full-length album, and from a production standpoint a major improvement over the rough edged Hymn to Abramelin and Extreme Cold Weather (though I truly heart that last one).

Title track "Choir of Horrors" opens with the chanting of monks before the aggressive, gory throat of Andy Kaina heralds an onslaught of simple death riffing. I really enjoy when this band breaks out into a lead over some old school busszaw of a rhythm. "Akasha Chronicle and the pulverizing "Weeping Willow" add some velocity and a level of heavy ballast to the proceedings and the album gets even more groovy and evil through "Lycantropus Erectus". The latter half of the album has some good thrash pieces in "Northern Command" and "Cautio Criminalis". The lyrics on the album are steeped in the horror and occult traditions that dominated black/thrash metal in the 80s, and not badly written!

Holy inquisition seized by desire
Young men and women for a most bitter fate
Hundreds and then thousands in the name of the holy church
Her messiah dies now, not on the cross but by the flames

Choir of Horrors sounds polished, certainly more polished than anything the band had offered previously. To that extent, it feels a little too clean for the type of aggressive occult metal the band is performing. That being said, it still sounds pretty good, and at times when the band uses the choir or acoustics it's vibrant and alive. Messiah never got a lot of credit, and they weren't one of the real standouts for the mighty Noise records, but they were a good band and this is one of their better albums, worth a listen.