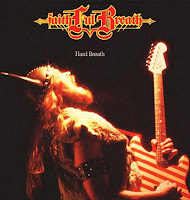 Faithful Breath was an ace German band who held on to their working class, bluesy heavy metal/hard rock style long after many of their peers had transitioned to the blossoming new genres of the 80s. They would make this transition themselves in a few years, when they transformed into the great speed metal band Risk, but the early half of that decade brought us some good Faithful Breath records like Skol, Gold 'n Glory, and Hard Breath.

If you don't like a lot of traditional blues with your metal music, stay far away from this album, because it's everywhere. Tracks like "Give Me What I Need" and "Warriors" veer quite close to the source, and I honestly prefer the more metallic side of the album. "Killer on the Loose" reeks of "Immigrant Song", aside from Heinz Mikus' very conversational vocals and the chorus. "Under My Wheels" could have been on MTV alongside ZZ Top and the Dire Straits. "Kids, We Want the World" is a good cruising anthem. I also enjoy the instrumental "Riding to Mongolia" and the ballad gone rocker "Like an Eagle in the Sky" with its shrill backing vocal. "Night Comes On" is a great rocking climax to the album. Hard Breath is not my favorite album from this cult legend, both of its successors are superior (and a lot more metal), but it's entertaining enough if you are fond of early NWOBHM and can relate to the era.

Highlights: Kids, We Want the World, Like an Eagle in the Sky, Night Comes On