Frightmare - Bringing Back the Bloodshed (2006) 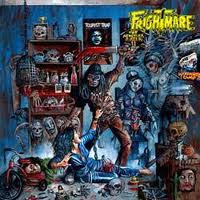 Frightmare is among my favorites from the Portland-based gore metal legions of Razorback Records. Like their compatriots, this project of Maniac Neil (Lord Gore, Blood Freak) carving their own bloody niche with an arsenal of thrashing riffs.

Bringing Back the Bloodshed sets the mood with an intro straight from an old horror VHS, then bursts through your bedroom window with Angela, a violent introduction to Frightmare's brand of thrashing, gory Carcass worship. "Friday the 13th Part 2" chronicles the return of Jason Voorhees, the music again swollen to bursting with sick, sick, sick guitarwork as remains constant throughout the album. The catchy hooks and classic solos never end. "Barbecutioner" might sound like a Dethklok song title, but it fucking slays, opening with a quick sample and a killer riff that could be packaged and sold as an instant moshpit kit, and ending with a hilarious surprise 70s funk outro. I could go on. Every song is awesome, the electrics backed by blasting drums and a fine production, clean and sharp like a honed machete.

The album isn't perfect, though. The Carcass-style dual modulated vocals are solid, but blessedly unintelligible. The lyrics are incredibly bad, some of the worst I've ever read that come from a band that otherwise knows what they're doing. I won't even reproduce them here because the last time I read them I had to quit listening to the album for a couple of years. They're seriously that bad, and reading them will hamstring your enjoyment of the album. You've been warned. The only exception to this rule is the album's final track, a great cover of Laaz Rockit's Leatherface.

But, hey, shitty lyrics you can't understand, whatever. Pop in Bringing Back the Bloodshed, turn the speakers up as high as they'll go, and go kill your neighbors with that rusty axe you've got laying in your garage. Happy Halloween!