Morality sucks! And so does this film!

I've always lauded the Scream series as being the low point for the slasher film, generic crops of beautiful people scythed down by a masked killer, sequel after sequel, an audience full of airheads, but I've decided the time has come for fairness. The slasher film blew chunks long before the original Scream ever hit the theaters, and Wes Craven himself was already one of the guilty parties.

One of the worst possible snafus you can place in a horror film is an antagonist who follows no rules, who can do essentially anything he/she/it wants. This is the reason so many shitty ghost films fail to elicit any horror, because the ghosts use any random tactic for a cheap 'scare'. Without a finite sense of place (i.e Alien, The Thing, and every other classic horror film), and a framework to work in, there can be nothing truly terrifying. So a maniacal serial killer who murders you in your dreams, where he can teleport, and do just about anything the film requires to kill a few minutes in the death scenes, is not my #1 choice.

The film stars John Saxon and a young Johnny Depp among a cast of relative nobodies, and Robert Englund plays the iconic dream slasher Freddie Krueger. Englund definitely had the look and the charisma to engrave the character into our collective pop culture, but every other character in the film is awful, the kind of awful that has you staring at your watch, waiting for them all to die so you can get the fuck on with your life. Unfortunately, they don't all die. Everyone knows the plot of this film: dream stalker picks off the cool kids in an average suburban town.

Did you seriously just tear open a feather down with your claws, Freddy? THAT IS NOT SCARY BRAH.

Even if viewing this from a nostalgic point of view, the film is bad. It's bubblegum. The acting is bad. The script is 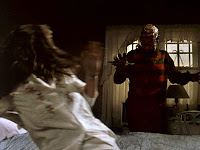 bad. The gory scenes are simply ripped from others (The Exorcist, etc). The score is typical of the 80s mainstream horror, and I like the synths, but they don't add much by way of atmosphere since everything playing out on the screen is so lousy. It's not scary at all, even for the 10 year old Autothrall who was so excited to have his daddy bring him to the matinee. And shall I even get into the long string of sequels which are even more worthless than this original? I like Jackie Earl Haley as much as the next guy, but I fail to see how even he will help resurrect this ailing, miserable franchise when they release the inevitable remake in 2010...yeah...Michael Bay...yeah.

25 years might have passed, Craven, but I still want my freakin' money back!