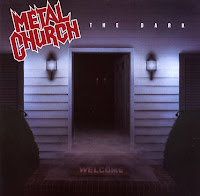 My fondness for Metal Church begins and ends with the early David Wayne period, the very first two albums, before Mike Howe stepped in and Wayne formed Reverend with the rest of Howe's previous band Heretic. Oh, cruel irony. With Wayne's mad hermit vocals at the helm, and a deal with Elektra records (alongside Metallica, no less), the potential was enormous for this band. Alas, they sputtered out like a rusted pickup with bullet holes in the tank.

The Dark is notable for having several of the most memorable Metal Church tracks ever conceived, while the rest of the record is at least solid enough to entertain. "Ton of Bricks" is an amazing opener for the album, anchored with a brickhouse thrash rhythm and Wayne's terrifying pterodactyl voice. "Start the Fire" is simply one of the best metal tracks of the 80s, with a huge rhythm riff and vocals that channel Udo Dirkschneider almost perfectly. The guitar work is great, and the lyrics totally cheesy, comparable to Twisted Sister's "Burn in Hell" in both tone and atmosphere.

So you see that they're all going nowhere.
Everybody's staring into space.
Start the fire.
Bring down the hammer.
Start start the fire.
Burning on forever.

The other truly momentous track on this album is the titular "The Dark", with some excellent chugging guitar rhythms and creepy, fun vocal patterns. One of the better horror metal songs for its day, essentially a tribute to all the bad films produced in that era (Nightmare On Elm Street, Halloween, whatever). Beyond these three monster tracks, there are some solid offerings in the doomy "Watch the Children Pray", the raging "Line of Death", "Burial At Sea", and "Western Alliance", none of which are quite so catchy.

The Dark is a balanced effort, despite the charisma of Wayne's vocals they never dominate the mix. The guitars are thick and insanely well produced, hell even better than on Master of Puppets the same year (though this album doesn't hold a candle to that all-time masterpiece of the genre). It has a lot of character, and though it's cheesy, it's a fun listen that I'd recommend to anyone seeking out gems of the 80s. This one wasn't exactly hidden in the back of the cave.

Highlights: Ton of Bricks, Start the Fire, The Dark, Line of Death