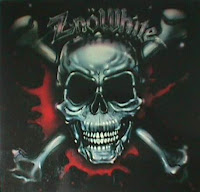 Act of God stands as one of my favorite all-time thrash metal records, but before evolving to that level of competence,
Znöwhite put out a few fast and dirty EPs with a pure old school fury. The lyrics were all over the place, ranging from the more serious fare the band would adhere to later, to tracks about partying like "Live for the Weekend", in which the line 'It's Friday night and you're hard as an anvil' is actually uttered. Okay, what am I complaining about, that's awesome.

Kick 'Em When They're Down is the second of their EPs, following up the equally raunchy All Hail to Thee from the previous year. There are five tracks on this album, and Nicole Lee's sharp, aggressive vocals dominate the pumping drums and blazing guitars. Though the band was already producing the sharp and metallic, hostile tones on their earlier material, it's not quite at the level of holocaust thrash like Act of God. Regardless, all of these songs are fun, with the faster "Live for the Weekend" and "Too Late" my clear favorites. "Run Like the Wind" and "Turn Up the Pain" are slower tracks, but still pretty good. Lee remains one of my favorite female vocalists in metal for a reason, her biting tone is brash and unforgettable, while Ian Tafoya's rhythms are always kickass and the leads are quick and filthy. Znöwhite is one of the best metal bands to ever hail from the Midwest, insanely underrated. I'd suggest you start with Act of God over the EPs if you are new to their sound, but the earlier material is not a long stretch from what they'd become.

Highlights: Live for the Weekend, Too Late