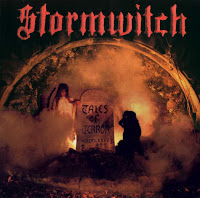 There was a lot of buzz for Stormwitch back in the 80s, as they managed to produce a slew of decent if forgettable albums during the early years of their career, and had what is probably one of the best metal band names ever. My own preference is for their first two records, Walpurgis Night and Tales of Terror, slabs of Maiden influenced power metal with enough character to stand out among the German scene before the speed/thrash takeover.

There are moments on Tales of Terror which are laughable, but the fun kind of laughable. Of course I speak of the intro to "Sword of Sagon" with some of the dorkiest, phoned in narration I've ever heard on a metal record. Surprisingly, the lyrics to most of the album are not so bad, comparable with most fantasy/heavy metal being released today. At the very least, they do service to melodic rockers like "Trust in the Fire", "Lost Legions", the shrieking "Night Stalker" and the closing track "When the Bat Bites". Stormwitch had a sound which mirrored the Metal Blade roster of American bands, there are similarities to early Lizzy Borden and Omen, with Aldrian's vocals soaring somewhere between those two poles.

It´s midnight, a night-owl is howling
on a withering tree
but watch out, there´s something
Going on, on the cemetery
the body-snatcher
is digging up the graves
bone-marauding
no human corpse is safe

There is nothing remarkable or even particularly unique about Tales of Terror, but it's a solid spin for nostalgia and the melodic hooks are still quite listenable. The album was well mixed, all the instruments balanced and, unlike many other records of this period, Aldrian's voice does not steal any thunder from the band. Certainly if you crave the more melodic side of 80s bands like Omen, Exxplorer, Lizzy Borden, Anvil, and the like, this is worth hunting down, along with the band's debut Walpurgis Night.

Highlights: Point of No Return, Night Stalker, When the Bat Bites