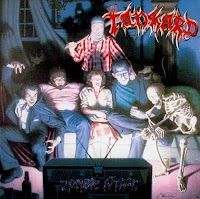 I can think of only three reasons why this album did not become an instant legend and the band a household name.

1. Master of Puppets
2. Reign in Blood
3. Somewhere in Time

Granted, those are three great reasons, but nonetheless, Tankard's debut Zombie Attack stands as one of the most wild, fun releases in the history of thrash/ speed metal. Born of a punk furor, the album rages with fast paced anthems to everything one could ever dream: zombies, warfare, and most importantly: alcohol. The band was rather blunt as to their obsession with teh beerz, one need not look past their chosen monicker to realize their association with the finer things in life. Zombie Attack is a painfully underrated record, and I look on with horror when reading the takes of others on this seminal and spectacular work.

But I am here to set the record straight. This is one of the very best releases of this genre, ever. Every track is fun, with maniacal, raw riffing, absurd lyrics that are also awesome, and hellish energies. It takes only the first track, "Zombie Attack" itself, to engrave itself into your memory, with the horribly endearing intro and all. Leatherpunk fistfucking rhythms scream into being over raucous, pounding drums and the sneering vocals of Gerre, who is probably the pinnacle of human evolution. The leads burn out of nowhere, the bass is having a blast below, and you leave the track sweating and drinking for your life, with nine more to go! "Acid Death" takes no time in returning you to filthy speed with hilarious Satanic lyrics, and I mean hilarious:

No, nothing is lost in translation. "Mercenary" follows, another barn burning splatter of dirty gutter thrust, the guitars creating an acrobatic funhouse pattern and the chorus is totally fucking punk. "Maniac Forces" uses spooky bell slaps and vocal choir synths to build a cheesy atmosphere, which is all too soon broken by furious blinding speed. HOLY FUCK. If you cannot smash a beer bottle on someone or something to this track, why be alive? Tankard separates the men from the boys, and then sends those boys off scurrying to the local parish. Next up we have the band's bible "Alcohol", western swing succumbing to another blitz of angry drunken fist fighting. "Tankard (Empty)" continues the theme with some bluesy swagger, and as you predict, yes it changes into something fast, with lightning bass and punkish rhythms.

We have come to slamdance tonight
Bangin' and bleedin' till the fuckin' end
Playing fast and running free
Stand up maniacs, you have to fight
We want to drink some fucking beer,
we want to drink some whiskey
Liver is broken down so bloody hard
I keep on drinking until I drop
Bang your head against the fuckin' wall
Show the damned whimps who we are

Zombie Attack is like the Fight Club of thrash metal. If you are a man, it will have an intrinsic value to your life. If you don't like it, you're not a man. And if you're not a man, listen to Ratt or something instead. I'll be over here, trashing up my local bar in a blinding berzerker barrage of testosterone and bad taste, waiting for the pavement to rise up and greet me with its cold, still embrace.

Highlights: everything until the inevitable hangover