One of the few items on this blog as old as I am, The Texas Chainsaw Massacre has stood the test of time as one of the all-time great horror flicks. Though the film is 35 years old, it still remains as fresh to mine eyes as it did when I watched as a teenager. In fact, my admiration for the film has only grown. Part of this is the superb direction of Tobe Hooper, one of my favorite helmsman for this genre. Whether producing a masterpiece as this, or even a dud, his work is almost always fascinating and fun.

The story is based on an urban myth, which is actually bogus (take that, viral marketing of the future!). A group of five young men and women are visiting a Texas graveyard which has been vandalized by grave robbers, and then decide to head to the old homestead of handicapped Franklin and his sister, beautiful Sally. En route, they have a strange encounter with a hitchhiker who engages Franklin in conversation about the local slaughterhouse, before cutting himself and taking an unwanted picture of the group in the van. He then proceeds to cut Franklin, and gets kicked out, but before the group can pull away, he smears his own blood on the side of the van in some sort of figure. From there, the group hits up a local gas station unsuccessfully for fuel, and decides to go to the homestead. There is something fishy about the farm house next door...and you know the rest! If not...what the fuck is wrong with you? Go rent this film today.

The Texas Chainsaw Massacre is a tantalizing film. From the opening shot of corpses impaled upon a gravestone, to the final chase scene, I cannot peel my eyes away. Despite its strange host of characters, what makes the film so strong is its plausibility. Interesting, if strange, conversations that seem on the fly, like they were real. A finite group of victims, a finite group of antagonists, and a series of brutal slayings that is also pretty realistic. Leatherface is no supernatural force of nature, he's just a mentally imbalanced fruitcake with a chainsaw and a dead skin mask. The Hitchhiker and the Cook are also extremely memorable villains. I'll never forget that first conversation in the van, nor will I forget the Cook's bizarre shifts of morality.

There is so much positive to say for the film. It uses its locations very well. A little piece of rural, decaying Texas serves as the perfect stalking ground for this family of nutjobs. The farm is littered with creepy baubles, the remains of various people and animals are converted into furniture, or just left lying around in this redneck charnel house. Everything shown in the film hints at a much wider mythology in the universe of the film, one that was unfortunately not explored in the lackluster sequels (or the boring Michael Bay remake). The film also makes great use of various times of day, from the afternoon opening to the following morning's climax. The soundtrack is superb. Aside from the country and folk rock tunes on the radio, sparse ambience and percussion is used to perfect effect in every gripping scene.

These would all be reasons enough to see the film, but really, where would it be without good acting? Gunnar Hansen is the best Leatherface ever, going far over the top, as he makes creepy 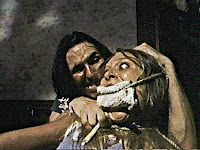 animal sounds and shifts his huge bulk about in a chainsaw dance. You will never forget his subtle motions. Edwin Neal and Jim Siedow are even creepier as the Hitchhiker and the Cook. Even Grandpa is frightening, though he does next to nothing. As for the protagonists, the gorgeous Marilyn Burns truly sells the film. She seems realistically terrified through her first chase scene, and on the verge of madness when she is caught and 'brought to dinner'. Hers is a better maiden in distress performance than many I've seen in the past 35 years. The rest of the cast is rounded out well (in particular Paul A. Partain as the wheelchair bound Franklin), though they have less important roles.

You're best to ignore the sequels. Only the followup, Texas Chainsaw Massacre II, directed by Hooper, comes close, but even that is pretty lame. Ignore the remakes. They suck. The original film is the only one that matters, and it is possibly the best of the 'slasher' works to date. The saw is the law, folks. A film worth every frame.