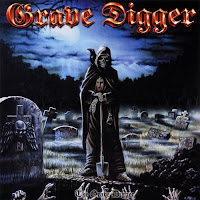 The Grave Digger is a lot of things for German power veterans Grave Digger. For one, it’s the very best of the band’s concept albums, easily trumping Tunes of War or anything else the band has offered since. The Edgar Allen Poe concept was a great idea to run with, and the dark and heavy edge to the tunes does it a service. Naturally, one would associate the writings of Poe with a gothic metal style, or perhaps black metal, but Christ Boltendahl succeed in living up to the theme.

The Grave Digger is also the band’s very best, track for track effort. Each and every track fucking rages, and though a number stand out from even this worthy company, you can count on this album whenever you want to bang your head and fist (don’t do it together!) The album has the same dark edge that made The Reaper so great, and this album goes one better, with a more consistent set of songs. The brooding “Son of Evil” creates a creepy, slow buildup for the rocking namesake of both the band and album. “Raven” delivers a stormy telling of the tale, and “Scythe of Time” is a big power metal with a riff that’ll have Accept and Primal Fear fans howling. But, as good as this first crop of songs is, none of them compare to what follows, the amazing dark anthem “Spirits of the Dead”.

The song had my jaw on the floor and my tongue wagging with blind, undying, newfound loyalty to these German maniacs, with riffing to die for and a catchy chorus that conjured both metal pride and tears. But let me warn you in advance…there is a BETTER SONG yet to come! But first, one must ‘suffer’ through the epic “The House”, the ball busting “King Pest”, and the churning grooves of “Sacred Fire”, to arrive at the badass “Funeral Procession”, with pretty much the best Grave Digger riff in history, and a chorus that truly beckons the dead from the earth!

And the album STILL isn’t over. “Haunted Palace” is an atmospheric speed metal anthem with some a nice, twisting verse riff. “Silence” is a big power ballad, but probably the weakest track on the album, especially when followed by the bonus “Black Cat”, which rocks.

Manni Schmidt’s playing is impeccable on this record, and Jens Becker holds it down with some great, grooving bass. The album sounds enormous, clunky and morbid, like a graveyard full of drunk 80s heshers surrounding a live band on the back of a pickup truck. I would probably pay Grave Digger a few hundred dollars to see them live in such a situation, and you should probably pay whatever you must to acquire this album.