Though he's turned to 'subtler' fare for his past few films, Cronenberg is best remembered for all the wild ideas given flesh by his early work. Films like Scanners, Videodrome, Dead Ringers, and The Fly have all assumed their rightful positions in the hierarchy of dark cinema, but reach back further, and you'll find some even stranger productions. Shivers, Rabid and Crimes of the Future were all well plotted and creepy ideas that did not ultimately live up to the mind that had conceived them, and I feel The Brood falls into this category as well.

Both written and directed by Cronenberg, The Brood tells the tale of an experimental psychotherapist, Dr. Raglan (performed by the always fascinating Oliver Reed), who has conceived a trancelike therapy know as 'psychoplasmics'. This manifests in a psychic transfer of inner demons and pains into physical extremities, diseases, and worse. Why anyone would want to undergo such a treatment is beyond my comprehension, for as the film soon tells reveals, there is no evidence that the therapy actually works. Noone seems 'cured', they are now simply carrying around some deformation in addition to their psychological issues. Nonetheless, Frank Carveth (played straight by Art Hindle) is trying to take care of his daughter Candice while his insane wife Nola (Samatha Eggar) is undergoing Raglan's treatment. One day Frank notices some bruising and cuts on Candice's back...

Needless to say, 'psychoplasmics' have gone horribly wrong. While many of the patients have transformed their agonies into skin welts, one has developed lymphatic cancer! And worse yet, 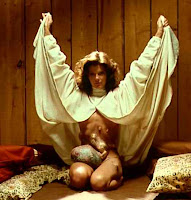 Nola Carveth is birthing strange, mutated children that murder anyone her sick mind believes is threatening her immediate family. 'The Brood' are unnatural little things that beat people to death with mallets, and in one scene, some bedside glass baubles! Perhaps the most effective scene in the film is when two of the Brood beat Candice's school teacher to death with mallets in front of her gradeschool class. Otherwise there is very little gore here, aside from the infamous scene in which Nola births one of the Brood and eerily begins lapping the afterbirth clean with her tongue. Fantastic!

The Brood is well acted and it has a rousing, if predictable score, but it is another case of a film in which I found myself waiting for the good parts, because the rest is simply not that interesting. Many of Cronenberg's films operate on deeper, personal levels to the director, but the only lesson learned here is another 'don't fuck with nature' scheme. There aren't many special effects here aside from skin welts, mutated children that look like Star Trek aliens of the week, and that last, morbid scene of Nola and the infant. I can see how this may have been shocking 30 years ago in a cinema. Much of the horror in the film is the sublime variety. In the end, The Brood is a little creepy, but there are no real scares, and it doesn't hold a candle to some of Cronenberg's other work.