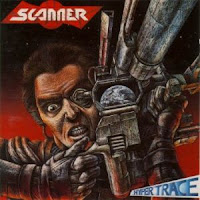 By all rights, Scanner should have been every bit as big of a band as Helloween. They were just a few years too late, but had that same wild, anthemic flare combined with raw, excellent guitar work and shrieking vocals which made Walls of Jericho such a classic. Add to this the science fiction theme, which was pretty novel for early power metal, and you've got quite the find. Hypertrace was the band's first album, and remains their best (only Terminal Earth comes close). If you enjoy German power and speed metal with higher register vocals (i.e. Rage, Gamma Ray, Primal Fear, etc), and have not heard this band, you are doing yourself a disservice. Track down the first two albums immediately.

Hypertrace is in fact a concept album, though the sequence of songs on the album is not the sequence of the narrative. But it only takes the first track "Warp 7" for it to hook you, as Michael Knoblich's insanely melodic, harpy-like vocals carry you out into the universe in gritty 80s style aboard the invisible Star Destroyer in your mind. Powerful leads, perfectly selected rhythm guitar sequences, and the damned song makes me smile every time I turn it on. Ditto for the glorious anthem "Terrion" and the raging "Locked Out", both of which sparkle with perfection and an intense sense for unforgettable riffs. Not convinced? "Across the Universe" is like a galactic anthem for happy space unity, Knoblich's lines in the verse cut out across the void like lasers.

I have already orgasmed three times while writing this review. Try and guess where? "R.M.U." is next, and the longest track on the album (almost 6 minutes). Although it's solid and entertaining, it's the ONLY track on this album that I didn't outright love, and the ONLY reason this album does not have a perfect score. "Grapes of Fear" rules, and "Retaliation Positive" is immense, a slower track which builds up a good fist pump before Knoblich just explodes off in the chorus. "Killings Fields" is a satisfying close to the album, and the bonus tracks "Wizard Force" and "Galactos" are both excellent as well.

All men of steel and hearts of ivory
See the comrades side by side
Under fire seems like eternity
A game, sinister
The souls are sold where is the ecstasy?
Where are the bold? Times change
Is there a need for all the wasted youth?
They call it war!

To think, 1988 was such an amazing year for metal music that Hypertrace doesn't even qualify as one of its top albums. It's like some cloud of sentient space debris flew over Earth that year, thought to itself "This is the species that broadcast Master of Puppets, I shall reward them with a shower of inspirational cosmic dust to ensure their quality control remains intact." Scanner started with a bang, and carried this quality forward to their second album (even though S.L. Coe took over on vocals, he had a similar screech to Knoblich). Their later work is a mixed bag, but very high recommendations here to any fan of melodic speed/power metal! This is one kickass German album, criminally overlooked.