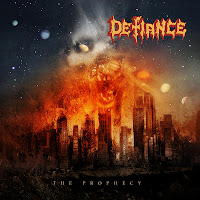 17 long years have passed since Defiance's last album, Beyond Recognition, and in the interim some of the members have been dicking around in other bands like Skinlab. Though I've never numbered the band among my very favorite Californian thrash acts, they did produce some decent efforts in Product of Society and Void Terra Firma. So it's good to hear them return to some thrash metal, and The Prophecy does a respectable job of this.

Steev Esquivel's vocals sound much like they have in both his bands, perhaps a little deeper and more aggressive here than on previous Defiance albums, but it creates a percussive effect much like the lower range of Chuck Billy. The band knows they've got to grab you by the balls right away and the album does so with the molten, grooving thrash of "Prion" and "The Prophecy", the latter of which has a Testament-style chorus. The riffing is far from classic but the tracks at least get the blood pumping, and the album does offer better tracks on its latter half, such as "Sloth", "Dissolving Around You", and "Eyes of the Front".

The Prophecy may not be the best written of the band's albums but it does have the loudest and most brazen production. Their guitars have always been on the thin side, yet effective, and this is kept in check here. Esquivel's vocals are large and in charge, but concussive enough to demand a little respect. It's good to have Defiance back, but this is not one of the better reunion albums to have emerged in the born again thrash metal scene. It seems to get better as it goes along, but the hooks just don't sink in like they did with Void Terra Firma.

Highlights: Sloth, Dissolving Around You, Eyes of the Front