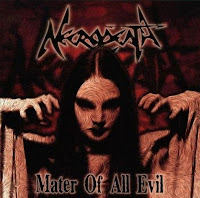 After a 10 year hiatus, Italian thrash/death cultists Necrodeath were to return with a new record, and Mater of All Evil was the result, an energetic succubus lashing which took the morbid visions of their past and dialed everything well past the volume limit. This album is vile, with vocals dripping more hatred than a busload of mid 80s Kreator vinyls. And that would be the major influence for this band, Mille's brand of eviscerating snarl which sounds like it is choking on the blood of its latest victim. There are also some deeper grunting vocals that serve as a diabolical, well-placed counterpart.

Necrodeath was obviously not expecting anyone to survive this album, so the focus is more on completely destroying the listener rather than writing complex or entirely memorable melodies. The first two tracks are "The Creature" and "Flame of Malignance", and it feels like getting a pitchfork to the face multiple times, collapsing to the ground only to be trampled by the mobile infantry of the Abyss. "Black Soul" slows things down for a while...with some tasty acoustics...but these are not to last, as even this song transforms into a fistful of scorn that repeatedly batters you on the bridge of your nose. Tracks like "Hatred and Scorn" and "Serpent" provide you with more relentless havoc, but the album does thankfully pace itself out with some variation: the slower thrashing "Void of Naxir" and the moving, atmospheric "At the Roots of Evil" with some Slayer-ific melodies.

This is possibly the best thrashing Necrodeath has ever given through its career. Some might adhere to the classic tones of Into the Macabre, but really this is a bulldozer of an album worthy of even Bulldozer (the other creme of the Italian thrash crop). A swarthy, expert production, blazing guitars, and venomous lyrical spit make it worthy of any fan of black occult thrash metal.