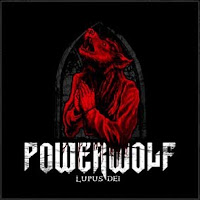 In all honesty, Lupus Dei is the type of album Ozzy Osbourne should be releasing these days. Not to infer that he would be capable, but Powerwolf really has that same cheesy, pompous veneer that made Ozzy so great on his solo albums during the 80s. That said, at least we have Powerwolf to offer us these libations to gothic horror, alongside the band's unforgettable, brazen chorus parts, haunting organs and choirs, and big, traditional metal riffs.

They've only released three albums thus far, but Lupus Dei is far and above the best of them, taking the style introduced on Return to Bloodred and cranking it to 11. Every song on this album is fucking hilarious and amazing, an anthem for every wannabe vampire goth in the Western World, and for those of us who like to laugh at them. I had already been versed on the band's campy image, and of course their debut, but even forewarned this album made my head explode, and my cheeks burn bright red for the next 45 minutes. It's jolly and in bloodsucking taste, yet quite powerful even despite itself.

After the gothic intro, "We Take it From the Living" opens with huge organs and slamming rhythms, as Attila Dorn reminds you exactly why he's one of the best voices in heavy metal. In English, OR in Latin! His voice is massive, and distinct, but despite its pitch it retains a gritty edge to it, even when smacking a higher register. "Prayer in the Dark" unleashes an onslaught of POWER metal, Dorn's vocals searing through like an elder monk reading the sins of the world from a distant Carpathian mountaintop. The gang shout chorus doesn't hurt either. "Saturday Satan" is an anthem of gorgeous organ synths, bells, and careful guitar plucking as Dorn sets up the vocal pattern. Fucking massif!

The seven is my number
Temptation is my game
I came from six feet under
And Satan...Satan is my name!

Next, we arrive at one of the finest moments on the album, the bombastic "In Blood We Trust", which engraves a pattern directly into your brain. I still walk around singing this song today...even though two years and many thousands of metal albums have passed through my awareness. The riffs are balls out here, inviting you through their simplicity and rewarding you with a punch to the chest. The next few tracks are all gold, "Behind the Leathermask" with another operatic intro that morphs into killer, meaty melodic hooks. "Vampires Don't Die" is a rager, but not one of the album's creme de la neck. "When the Moon Shines Red", however, is fucking SICK. If you know me at all, you must have the lyrics mesmerized, because I will quiz you if you're riding in my car, and if you fail....I throw you right out the passenger door. This song is HILARIOUS. Why do I need Dethklok when something like this exists?

Nothing could possibly top this, yet Powerwolf gives it their damndest for the remainer of the album, with the excellent "Mother Mary is a Bird of Prey", "Tiger of Sabrod", and the glorious, operatic title track which closes the curtains and returns you to pitiful reality. Powerwolf is a funny band, but they're not actually very cheesy. Their music is like a wakeup call: get over yourself, and have some fucking fun once in awhile. That they can offer this to their fans while crafting albums of such an unparalleled production standard is amazing. Powerwolf is loud, proud and in charge. Sadly, the follow-up to this record would not be at the same level of songwriting, though it's consistent with the style. But truly, the sky is the limit for such a band a this...

Highlights: Saturday Satan, Behind the Leathermask, In Blood We Trust, When the Moon Shines Red, Mother Mary is a Bird of Prey