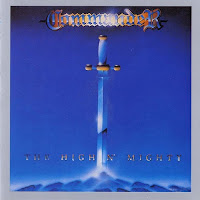 California's Commander was another of those tragic cases in which a band formed, released a reasonably good album during the saturated late 80s, and was never heard from again. It's a shame, especially when the album released was of the caliber of The High'n Mighty. Commander had a style not unlike that of earlier Liege Lord, Cities or Lizzy Borden, and wrote lyrics about Arthurian legend and historical battles. The riffs burn with that cutting, 'hot' lead that dominated middle of the pack metal bands in the 80s, and Jon Natisch had a slicing vocal style not unlike James Rivera (Helstar, etc).

The High'n Mighty is a solid effort all around which sounds only mildly dated today, aside from the production. The opening combination of the epic "Knights of the Round Table" and "Wizards" make for a swift knockout punch, instilling a confidence that this album is both professional and well rounded. Fists and lighters resound to rockers like "Terror", "High'n Might" and the synth-washed "Return of the Goths". "Die By the Sword" was an epic for its time, over 8 minutes of cheesy synth intro and big, simple riffing that might do Manowar proud. 1987 was a year which produced records like Abigail, Visual Lies, Taking Over, and Hall of the Mountain King (to list but a few), so it's no wonder Commander was lost in the shuffle. But this sole effort is good enough that diehards for early Maiden-esque power metal should track it down and revel in its charm's. Okay, maybe not revel...

Highlights: Knights of the Round Table, Wizards, Return of the Goths