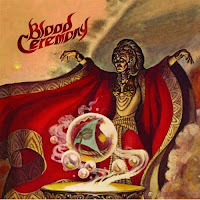 Speaking as someone who takes any chance he can to revel in nostalgia over his hobby, Blood Ceremony came right out of left field and smacked me right upside the memory banks. Fusing a Sabbath-inspired storm of bluesy, bleak riffing with the folk flutes of Jethro Tull would be one thing, but this Canadian band goes a few steps beyond with Alia O'Brien's classic female rock voice, and a clear inspiration taken from early occult horror cinema. Their self-titled debut Blood Ceremony is both groovy and creepy, and a great fix for an afternoon of inhalations and fond remembrances.

The mix of the album is fully in line with its nature. Though more vibrant than their 70s counterparts, the guitars dial back the distortion to a simpler time, infused with both melody and menace. The flutes and sparse organs shine through perfectly, the album feels like a live performance in your Johnny Bravo decorated living space. The drums are tin and crashing, the bass is laid back. When the album crushes, it does so with a swagger: "Return to Forever" is vintage Sabbath, along with the take-no-prisoners grooves of "I'm Coming With You". When the album calms, it is every bit as convincing: instrumental "A Wind of Wizardry" glistens with folk acoustics and flutes that hearken back to decades, even centuries past. "Hop Toad" jams, and "Hymn to Pan" haunts with a vengeance, developing into a terrifying trip with its irresponsible slather of organs and evil.

Now Astaroth's ship sets sail across the sky
Through Saturn's yawning hail, and into the eye
Black magic rites profane
Wizards are oft' to blame

Many bands attempt to evoke the 60s and 70s, but only a few modern efforts have truly brought me back into the folded arms of those antiquated times. Alongside Sweden's Witchcraft, Blood Ceremony are one of the most successful. O'Brien's vocals are not always 100% interesting, they could use some more peaks and valleys rather than the often dull plodding within a safe range. A few of the riffs may be weaker than others, but in the end, the entire album shines as a single listening experience.