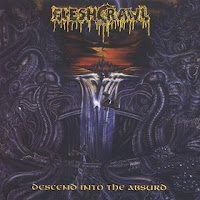 Germany has had its fair share of death metal, a solid if softspoken scene which has existed since the early days of the genre's transformation and genesis. But few of its exports have exploded onto the scene in quite the same fashion as the excellent Fleshcrawl. This band would go on to create many great albums with a clear Scandinavian death influence, but ironically, their debut Descend Into the Absurd, which was actually recorded in Stockholm, bears more of an influence from bands like Death, Bolt Thrower and Pestilence.

This is an album I'd advise listening to at full volume for its many nuances. On the surface a simplistic crusher, the muddy walls of infernal guitar are dominant and powerful as the album performs its namesake upon you. "Between the Shadows They Crawl" is a frightening intro, created through ambient synthesizers, before "Phrenetic Tendencies" grinds you up into chopped liver with its barrage of tinny drums and the meaty breadth of its riffing. The album is like being force fucked by a sludge beast risen through a conduit from Hell, in your local swamp. There is little to the riffs but raw power, and the band often slows down to a doomy crawl, i.e. most of "Perpetual Dawn", the first half of "Purulent Bowel Erosion", and much of "Lost in a Grave". Through the crushing chords, the band will often insert bloody melodic lines that add to the grief wrought by the album. Other great tunes include "Festering Flesh" and "Evoke the Excess", but you're best off to just press play and absorb all 54 minutes of this underrated behemoth.

This is not a technical band, they don't strive to impress you with their effortless noodling or random, sporadic tempo shifting. They exist to crush, like a slow moving juggernaut of lost souls that sucks up all the life in its path. Your sorrow is inevitable when faced with an album like Descend Into the Absurd, and it's a great example of 'slow and steady wins the race' in the death metal scene. I give this album high recommendations to fans of early Asphyx, or the plodding British Bolt Thrower, who also produced successful albums with this intent. Though Fleshcrawl will produce comparable records like the furious As Blood Rains from the Sky... in 2000, this debut remains one of their very best.