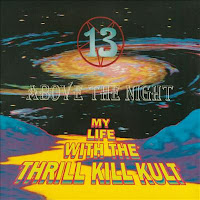 That most 90s college graduates can identify this band only by their metallic track "After the Flesh" from The Crow soundtrack is a grave disservice to what is probably one of the most refreshing and original artists every produced in the American underground. My Life With the Thrill Kult is a band which combines all its industrial dance and electronic impulses with soul music, funk, and whatever else fits the pattern. The lyrics explore the seedy underbelly of our society, like one too many nights spent drunk and molested on the Sunset Strip. 13 Above the Night is their most accomplished, thorough record (though many are worthwhile), and a fantastic trip through the smut, filth and horror that envelop our privileged, troublesome youth like a womb.

This album is simultaneously cheesy and seductive. Some might argue that the band's techno music core is vastly outdated, but I beg to differ: 13 Above the Night trancends time because of its crafty use of a myriad of sampling, and the despotic vocals of Groovie Mann. The album oozes a dystopian yet alluring vision of the sex-addled drug culture, the perfect soundtrack to some Timothy Leary advocate picking up a stripper for a night of blow, drops and BLOW. Each of the 13 tracks is creepy in a different way...this is not about vampires and werewolves, its about the desires and impulses some deny, and others revel in.

The album consists of faster, dance numbers such as "Delicate Terror", which is like if C & C Music Factory suddenly became the house band for Hell. "Dimentia 66" is acidic and arousing, Mann's sexy tongue punctuating every deep groove, and a plethora of samples and eerie synths that will drag you deep into this band's universe. "Final Blindness" is like a cheesy arena techno anthem, with AMAZING samples...I don't want to ruin them for you, but listen to how the 'up and down' sample repeats through the various track, with varying punchlines.

But these are only a few rabbits out of the bag. Thrill Kill Kult can also create some funky, memorable, creepy, sample-infused industrial R&B like the amazing "China de Sade" or the freaky funk of "Blue Buddha", a track which frightens me even to this day with its narcotic scripture and hallucinogenic atmosphere.

UGGGH! Spooky! Hypnotic! There are no dull moments on 13 Above the Night, it's all too consistent in chaining you and dragging you into the depths of its vices and indulgence, and if you let it wrap its tentacles around your sexbox or thinktubes, you will never forget it.

Highlights: there are no lowlights

I used to have an album by these kids, although I don't remember which. I could generally tell that they had something good going on, but either the album or my attention to it wasn't as good and I never really got into it. I'll have to check this out.