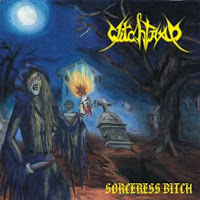 Colombia’s got a pretty busy brutal death metal scene, and some black metal to boot, but it’s not often I hear a band such as Witchtrap, clinging heavily to their 80s thrash influences with a crispy blackened veneer. Perhaps Norway’s Aura Noir is the best comparison, though Witchtrap are a little more lowbrow and ferocious.

The vocals of Burning Axe Ripper are vicious, very reminiscent of Mille from Kreator during his dirtier period in the early 80s. The riffing is fast and hammering throughout “Dark Lord” and “Ripping Torment”, but the band actually excels on the groovier, slower paced “Dead of the Night”, the lightning attack title track, and the lengthy, varied “Gypsy Ritual/ Face the Evil”. If you fancy the old school German thrash of Kreator and Destruction, or the black metal prototypes Venom, Possessed, Hellhammer, and their peers, you can just sink right into the album and lose yourself, because you’ll be right at home.

She was born on witching hour.
The evil wrath burned in her eyes.
Her steps were guided by evil light.
Celebrating full moon rites.
Sexual rites and grotesque arts.

Sorceress Bitch is a mean and hard mistress, with a production meant to wax nostalgic for its 80s influences rather than please the modern metal industry. Witchtrap are just as likely to bust out an old NWOBHM inflection in one of their riffs as a speed/thrash part, so it’s clear they have a healthy respect for the formative years of their craft. And I have a healthy respect for theirs, because this is a great, fun debut.

Verdict: Win [8/10] (black machine and metal blade are his right hand to win)